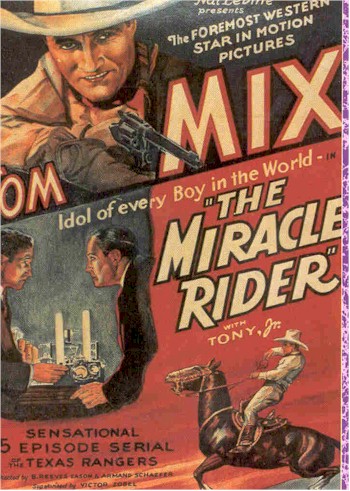 "The Miracle Rider" is a 1935 Mascot movie serial directed by and . The serial stars .

Zaroff (Charles Middleton), a rancher and oil company owner, wants to drive the Ravenhead Indians off their reservation so that he can mine the rare element X-94, a super explosive, found there and sell it to the highest bidder. Texas Ranger Tom Morgan tries to stop him and save the tribe.

This was Tom Mix's last film and his only sound serial.

The serial combined the large cast and interlocking plots of a silent serial with the science fiction and cliffhangers of the sound era.

Tom Mix, whose voice was strained and nasal due to a repeatedly broken nose and a bullet through his throat, did a lot of his own stunts, although some were doubled by .

This was Mascot's only 15-chapter serial.