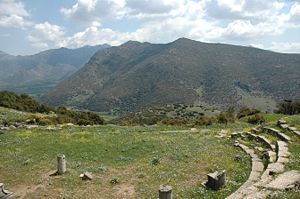 Orchomenus or Orchomenos (Greek: Ὀρχομενός) was an ancient city of Arcadia, Greece, called by Thucydides (v. 61) the Arcadian Orchomenus (Ὀρχομενός ὁ Ἀρκαδικός), to distinguish it from the Boeotian town. Its ruins are near the modern village of Orchomenos (before 1963: Καλπάκι - Kalpaki[1]).

It was situated in a plain surrounded on every side by mountains. This plain was bounded on the south by a low range of hills, called Anchisia, which separated it from the territory of Mantineia; on the north by a lofty chain, called Oligyrtus, through which lie the passes into the territories of Pheneus and Stymphalus; and on the east and west by two parallel chains running from north to south, which bore no specific name in antiquity: the eastern range is in one part 5400 feet (1600 m) high, and the western about 4000 feet (1200 m). The plain is divided into two by hills projecting on either side from the eastern and western ranges, and which approach so close as to allow space for only a narrow ravine between them. The western hill, on account of its rough and rugged form, was called Trachy (Τραχύ) in antiquity; upon the summit of the western mountain stood the acropolis of Orchomenus. The northern plain is lower than the southern; the waters of the latter run through the ravine between Mount Trachy and that upon which Orchomenus stands into the northern plain, where, as there is no outlet for the waters, they form a considerable lake.[2] The acropolis of Orchomenus, stood upon a lofty, steep, and insulated hill, nearly 3000 feet (900 m) high, resembling the strong fortress of the Messenian Ithome, and, like the latter, commanding two plains.

From its situation and its legendary history, we may conclude that it was one of the most powerful cities of Arcadia in early times. Pausanias relates that Orchomenus was founded by an eponymous hero, the son of Lycaon;[3] but there was a tradition that, on the death of Arcas, his dominions were divided among his three sons, of whom Elatus obtained Orchomenus as his portion.[4] The kings of Orchomenus are said to have ruled over nearly all Arcadia.[5] Pausanias also gives a list of the kings of Orchomenus, whom he represents at the same time as kings of Arcadia. One of these kings, Aristocrates, the son of Aechmis, was stoned to death by his people for violating the virgin priestess of Artemis Hymnia. Aristocrates was succeeded by his son Hicetas, and Hicetas by his son Aristocrates II, who, having abandoned the Messenians at the battle of the Trench in the second war against Sparta, experienced the fate of his grandfather, being stoned to death by the Arcadians. He appears to have been the last king of Orchomenus, who reigned over Arcadia, but his family was not deprived of the kingdom of Orchomenus, as is stated in some authorities, since we find his son Aristodemus represented as king of the city.[6] It would appear, indeed, that royalty continued to exist at Orchomenus long after its abolition in most other Greek cities, since Theophilus related that Peisistratus, king of Orchomenus, was put to death by the aristocracy in the Peloponnesian War.[7]

Orchomenus is mentioned by Homer, who gives it the epithet of πολύμηλος,[8] and it is also called "ferax" by Ovid,[9] and ἀφνεός by Apollonius Rhodius[10] In the Persian Wars, Orchomenus sent 120 men to Thermopylae,[11] and 600 to Plataea.[12] In the Peloponnesian War, the Lacedaemonians deposited in Orchomenus the hostages they had taken from the Arcadians; but the walls of the city were then in a dilapidated state; and accordingly, when the Athenians and their Peloponnesian allies advanced against the city in 418 BCE, the Orchomenians dared not offer resistance, and surrendered the hostages.[13] At the time of the foundation of Megalopolis, we find the Orchomenians exercising supremacy over Theisoa, Methydrium, and Teuthis; but the inhabitants of these cities were then transferred to Megalopolis, and their territories assigned to the latter.[14] The Orchomenians, through their enmity to the Mantineians, refused to join the Arcadian confederacy, and made war upon the Mantineians.[15] Henceforth, Orchomenus lost its political importance; but, from its commanding situation, its possession was frequently an object of the belligerent powers in later times. In the war between Cassander and Polyperchon, it fell into the power of the former, 313 BCE.[16] It subsequently espoused the side of the Aetolians, was taken by Cleomenes,[17] and was afterwards retaken by Antigonus Doson, who placed there a Macedonian garrison.[18] It was given back by Philip II to the Achaeans.[19]

Strabo mentions it among the Arcadian cities, which had either disappeared, or of which there were scarcely any traces left;[20] but this appears from Pausanias to have been an exaggeration. When 19th century classicist William Smith visited the place, in the mid-19th century, the old city upon the summit of the mountain was in ruins, and there were only some vestiges of the agora and the town walls; but at the foot of the mountain there was still an inhabited town. The upper town was probably deserted at a very early period; for such is the natural strength of its position, that it is unlikely that the Orchomenians were dwelling there in the Peloponnesian War, when they were unable to resist an invading force. Pausanias mentions, as the most remarkable objects in the place, a source of water, and temples of Poseidon and Aphrodite, with statues of stone. Close to the city was a wooden statue of Artemis, enclosed in a great cedar tree, and hence called Cedreatis. Below the city were several heaps of stones, said to have been erected to some persons slain in battle.[21]

The modern village of Orchomenos stands on the site of the lower Orchomenus. On approaching the place from the south the traveller sees, on his left, tumuli, chiefly composed of collections of stones, as described by Pausanias. Just above Kalpaki are several pieces of white marble columns, belonging to an ancient temple. There are also some remains of a temple at a ruined church below the village, near which is a copious fountain, which is evidently the one described by Pausanias. On the summit of the hill are some remains of the walls of the more ancient Orchomenus.

In the territory of Orchomenus, but adjoining that of Mantineia, consequently on the northern slope of Mt. Anchisia, was the temple of Artemis Hymnia, which was held in high veneration by all the Arcadians in the most ancient times.[22] Its site is probably indicated by a chapel of the Virgin Mary, which stands east of Levidi.

In the southern plain is an ancient canal, which conducts the waters from the surrounding mountains through the ravine into the lower or northern plain, which is the other Orchomnenian plain of Pausanias.[23] After passing the ravine, at the distance of 3 stadia from Orchomenus, the road divides into two. One turns to the left along the northern side of the Orchomenian acropolis to Caphyae, the other crosses the torrent, and passes under Mount Trachy to the tomb of Aristocrates, beyond which are the fountains called Teneiae (Τενεῖαι). Seven stadia further is a place called Amilus (Ἄμιλος). Here, in ancient times, the road divided into two, one leading to Stymphalus and the other to Pheneus.[24] The above-mentioned fountains are visible just beyond Trachy, and a little further are some Hellenic ruins, which are those of Amilus.[25]