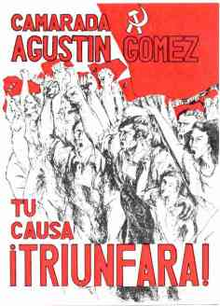 PCE (VIII-IX) was one of many groups that broke away from PCE during the period when Santiago Carrillo held the post of PCE general secretary and directed the party towards Eurocommunism; it was founded in 1971. A prominent leader of the new party was Augustín Gómez. It published a magazine called Mundo Obrero (same name as the publication of PCE).