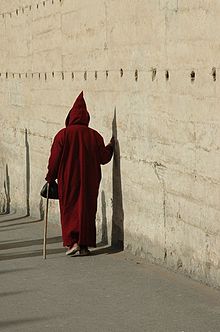 A djellaba worn in Fes, Morocco

Traditionally djellabas are made of wool in different shapes and colors though nowadays lightweight textile djellabas have replaced wool djellabas in emigrant communities in the West, e.g. Paris, Brussels, et cetera. Among the Berbers, or Imazighen, such as Imilchil in the Atlas Mountains, the color of a djellaba indicates the marital status (single or married) of the bearer—a dark brown djellaba indicating bachelorhood.[citation needed] Traditionally, djellabas reached down to the ground but the lightweight textile djellabas are somewhat slimmer and shorter. Married men wear a light-colored djellaba sometimes along with a red Fez hat and soft yellow slippers (balgha, Arabic: بلغه, or babouche) weather permitting. The men's djellaba is generally baggy and plain. So-called women's djel(l)abas (abaya "cloak" (Arabic: عباية‎ ‘abāya[tu] or عباءة ‘abā'a[tu], plural عبايات ‘abāyā[tu])) are tighter and may sport elaborate decorative stitching in a variety of colors. Among the Imazighen women as well as men sometimes add a scarf (tagelmust sometimes called a cheche) to the outfit.

Almost all djellabas of both styles (male or female) include a baggy hood called a "cob" that comes to a point at the back. The hood is of vital importance for both sexes, as it protects the wearer from the sun, and in earlier times was used as a defense against sand being blown into the wearer's face by strong desert winds. In colder climes, as in the mountains of Morocco and Algeria, it also serves the same function as a winter hat, preventing heat loss through the head and protecting the face from snow and rain. It is not uncommon for the roomy hood to be used as an informal pocket during times of nice weather; it can fit loaves of bread or bags of groceries.

Traditional djellabas are generally made of two types of material, cotton for summer wear and coarse wool for the winter. The wool is typically harvested from sheep living in the surrounding mountains.

The Islamic religion is also a key factor in the way that Moroccan people dress. The djellaba covers the whole body and is therefore an acceptable modest outfit for both men and women.