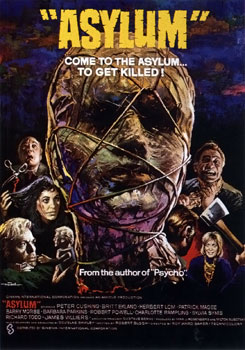 The film opens with Dr Martin () arriving at a secluded asylum "for the incurably insane" located in an unidentified area of rural Britain. He makes his way to the office of the institution's manager, the wheelchair-bound and Dr Lionel Rutherford (). Rutherford explains that he owes his current incapacitation to an attack by an inmate ("Never turn your back on a patient", he grimly advises), before turning his attention to Martin's recent application for the post of head doctor at the establishment. He proceeds to propose an unorthodox plan to determine Martin's suitability for the post. One of the asylum's current inmates is Dr B. Starr, the former head doctor who underwent a complete mental breakdown that left Starr apparently completely unaware of any genuine previous identity (and thus possibly suffering from ). Rutherford challenges Martin to interview the inmates of the asylum, and to deduce which one is Dr Starr. If his choice is correct, then Rutherford will "consider" him for the post.

In the cell, Martin meets Bonnie (), who recounts a tale of how she was having an affair with the married Walter (), whose wife Ruth () has recently started studying alternative religions, particularly . She is also refusing to grant Walter a . Walter and Bonnie therefore conspire to kill Ruth. This is achieved by Walter buying her a new chest freezer, installed in their house's cellar. He shows this to Ruth, and then immediately kills her with an axe, before proceeding to her, wrapping the pieces in brown paper, and placing them in the freezer for later disposal. Spotting a voodoo charm bracelet that she was wearing, he contemptuously throws this into the freezer as well, before returning upstairs to await Bonnie's arrival.

However, he is disturbed by a sudden noise, and turns to see the wrapped head of Ruth's corpse "watching" him from the doorway to the cellar. It promptly moves out of his vision and, curious, he heads back down to the freezer, opening the lid to check his wife's remains. Suddenly, her arm reaches out of the freezer to grab him by the throat.

Soon afterwards, Bonnie arrives. Puzzled by Walter's absence, she in turn descends to the cellar, and opens the freezer - finding (to her shock) his dead body inside, just before she is abruptly attacked by the separate wrapped sections of Ruth's re-animated corpse, which she defends herself against with the axe. However, one severed arm grabs her face, and in a frenzy of terror, she swings the axe repeatedly towards herself in an attempt to dislodge it...

The scene shifts back to Bonnie's cell. She calmly informs Martin that, when the police arrived, the body parts had gone, and that her tale was disbelieved, leading to her incarceration. However, she insists, her story is true - and she turns fully towards Martin, showing her hideously axe-mutilated face to him.

Max ushers Martin from Bonnie's cell, and leads him to the next one...

Inside this cell, Martin meets Bruno (), who is sitting cross-legged and sewing imaginary clothing. Max leaves Martin with Bruno, and the latter, insisting on his own sanity, recounts the story of how he came to be an inmate. He states that he was previously a tailor in , but that business had dropped steeply off, to the point where he and his wife Anna () were threatened with by their landlord due to their inability to meet their payments.

This situation seems set to improve when a Mr Smith () enters the shop one day, commissioning Bruno to make an extremely expensive suit from a special fabric which he provides. However, Smith sternly insists that Bruno must not work on this suit after , stating "there must be no mistake." However, Bruno, while working on the suit, fails to notice that he is doing so after midnight due to . He pricks his finger with his needle, and the that drops onto the fabric promptly vanishes without trace. Bruno observes this with understandable concern, and resolves to work more carefully in the completion of the suit.

The suit is duly completed, and Bruno takes it to Smith, requesting his payment. However, Smith proves to be dangerously obsessive. His had died some time before, and - although he had once been rich - he is now all but penniless, having spent his fortune on a book of which detailed how the dead could be returned to if clothed in garments made from the fabric that he had obtained. Bruno is understandably distraught, and refuses to hand over the suit. Smith draws a and attempts to intimidate him into doing so. A struggle ensues, during which Bruno accidentally shoots Smith dead.

Returning to the shop, a horrified Bruno explains what has happened to his wife, and insists that she burn the suit. However, she foolishly places it on a . Instead of Smith's son being given new life, the dummy is animated instead, and in the ensuing alarm causes Bruno's shop to be set on ...

The scene returns to Bruno's cell, and he breaks down in tears as he explains how Anna was killed and the dummy went missing, so that the police refused to believe his tale and he was incarcerated.

With a look of pity on his face, Martin takes his leave of the pathetic sight and moves on to the next cell...

In the next cell, Martin is greeted by a surprisingly cheerful and affable young woman, Barbara (). She freely admits that she is no stranger to asylums, having been in one before, and tells us the story of what happened when she was last released from one.

It begins with Barbara's brother George () and her nurse, Miss Higgins () welcoming her back to their expensive-looking home. While they both have her best interests at heart, they are concerned for her welfare in a near-draconian way, especially in their attempts to wean her off of her . They are also concerned for her when she begins confidently asserting that her friend Lucy () will soon be coming to visit.

One night soon afterwards, Lucy - a vivacious young blonde woman - abruptly appears in the house, and insists that Barbara must leave the oppressive household with her, although she also expresses anger that Barbara is still taking medication - "I should be enough for you!", she rages. Barbara is keen to co-operate, even when this leads to the Lucy killing both George and Miss Higgins. However, the murders attract attention, and Barbara is arrested for Lucy's crimes...

We cut back to the cell, where Martin asks if Barbara might know where Lucy is now - whether, maybe, she can be found and Barbara released. Laughing, Barbara announces that "she's right there", and points at her vanity mirror. From the glass, Lucy's face laughs back at the Barbara.

Martin asks Max to escort him to the final cell...

In the cell, Martin meets Dr Byron (), who is aware of Rutherford and appears to regard him with fury and contempt. He informs Martin that he is working towards transference. He is planning to do this with the aid of a small whose head is made in likeness of his own, and shows Martin a cupboard full of earlier models. He is planning to effectively "will" his own mannequin to life, and tells Martin that the interior of the robot is organic, a miniaturised version of his own . His aim is apparently to prove his sanity via this momentous breakthrough.

Martin concludes his interview, and Max shows him downstairs to deliver his judgement to Rutherford.

Meanwhile, Byron stares intently at his mannequin. Suddenly, the mannequin stirs into life. A triumphant Byron places it on the floor of his room, and it proceeds stealthily out of the door and into a , heading to the ground floor.

Downstairs, Martin chooses - rather than deducing Dr Starr's identity - to confront and lambast Rutherford for his harshly regime. He argues that the isolation of the inmates, plus the lack of any attempt to cure or re-habilitate them, amounts to barbarism. Rutherford coldly argues in return that the inmates of this asylum are completely incurable, and impossible to release. Holding up a , he states bluntly, "This is the only way to deal with Byron's sickness..."

The argument continues to rage back and forth, and, as it does so, the mannequin makes its way onto Rutherford's desk, picks up the discarded scalpel, and stabs him fatally in the back of the neck. He slumps forward, and the shocked Martin sees the Byron mannequin moving away. Still in shock, he stamps heavily on it, crushing its mid-section - which, to his horror, he sees is filled with tiny internal organs.

The mannequin "dies" - and, almost simultaneously, a scream sounds from upstairs in the asylum. Running up, Martin collides with a shocked Max, who informs him that he heard the scream from Byron's cell, and that, when he ran to check, he found Byron dead - and with his crushed as though by a huge weight...

Martin has heard, and seen, enough. Almost as an aside, he announces his decision that Byron (presumably due to his success) was Dr Starr, before purposefully heading towards Max's office to telephone the police, ignoring Max's sudden cry of "No, don't go in there!"

Inside the office, Martin discovers the corpse of a recently-murdered . He turns in shock to Max, who almost apologetically informs him, "I'm afraid your guess was wrong... I am Dr Starr."

The two struggle, but Starr gains the upper hand, and uses a 's tubing to strangle Martin. Having carefully also used it to assure himself that Martin is dead, Starr begins quietly giggling - a giggle which quickly builds to maniacally triumphant laughter...

The scene changes to some time afterwards. A new applicant for the post of head doctor, Stebbins () arrives at the asylum, to be greeted by "Max". Closing the door firmly behind them both, the latter affably states, "Got to keep out the drafts - as Dr Starr used to say ..."

"Asylum" is something of an unusual film among its fellows. Where others in the "series" ("Tales from the Crypt", "") seem at least to acknowledge a where Good can triumph and can be defeated, it displays a startlingly bleak - arguably, only one character has a happy ending, and that character is a . For all of its potential aspects and polite , the film stands as a strong counter-argument to those who claim that the likes of and produced little other than cosily reassuring .

* is rather disingenuously credited as having composed the music for this film: however, his contribution to the score is minimal - the majority being drawn from pieces by , in particular "" (heard over the opening and closing credits), and selections from his "" - being heard over both an early display of artworks depicting lunatics and throughout on the asylum's walls, and during the sequence of Byron's mannequin coming to life and making its way downstairs, while the booming crescendo of is heard over the sequence where the tailor's dummy is animated and rampages in Bruno's shop.

* 's closing line as "Max"/Dr Starr is delivered straight to camera, in such a way as to break the .

* There is some theorising among fans of the film as to whether Starr was so named as an . Some have observed that his surname is only one letter away from Dr Tarr, one of the main figures of 's "", a short story about two with unorthodox approaches to the treatment of the insane, while others point out that Starr's "full" name (as given in the film's promotional material, and on a name-plate in the asylum) of Dr B A Starr is a near-anagram of "bastard", and that, given Bloch's well-known fondness for , the name may have been given (in its abusive context) as a playful pointer to the cunning, vicious aspects of Starr's character.