Coulee
For unskilled laborers from Asia in the 1800s, see Coolie. 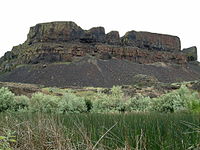 An upwards view of section of the wall protruding to the canyon. There is a marsh in the foreground. 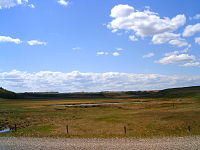 A view through a coulee, with steep but lower sides, and water in the bottom. 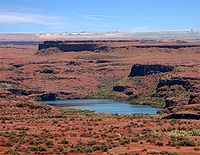 Drumheller Channels in the Columbia Basin of Washington 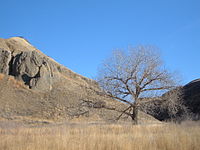 A view upward into a coulee in the Oldman River valley in Lethbridge, Alberta

Coulee (or coulée) is applied rather loosely to different landforms, all of which refer to a kind of valley or drainage zone.

The word coulee comes from the Canadian French coulée, from French word couler meaning "to flow".

The term is often used interchangeably in the Great Plains for any number of water features, from ponds to creeks.

In southern Louisiana the word coulée (also spelled coolie) originally meant a gully or ravine usually dry or intermittent but becoming sizable during rainy weather. As stream channels were dredged or canalized, the term was increasingly applied to perennial streams, generally smaller than bayous. The term is also used for small ditches or canals in the swamp.[1]

In some parts of Louisiana coulees are not concreted but rather sheer sided large ditches that collect smaller ditch runoff.

Aside from those formed by volcanic eruptions, they are commonly canyons characterized by steep walls that have been shaped by erosion. These types of coulees are generally found in the northwestern United States and southwestern Canada. In the American west, rapid melting of glaciers at the end of the last ice age caused catastrophic flooding which removed bedrock by massive down-cutting erosion, forming deep canyons. Some coulees may be seasonally dry or contain small streams, however these small streams do not have the magnitude of force necessary to form such expansive erosion.

In Wisconsin, they are the product of nearly a half million years of erosion, unmodified by glaciation (see Driftless Area[2]). The loose rocks at the base of the wall form what are called scree slopes. These are formed when chunks of the canyon wall give way in a rockslide. Left alone, the valleys are often woodland, with the ridgetops transitioning into tallgrass prairie when not turned into pasture or used for row crops.

Coulees provide shelter from wind and concentrated water supplies to plants which would otherwise struggle to survive in the xeric sagebrush steppe. Trees are often found in riparian habitats along streams in coulees and at the base of their walls.