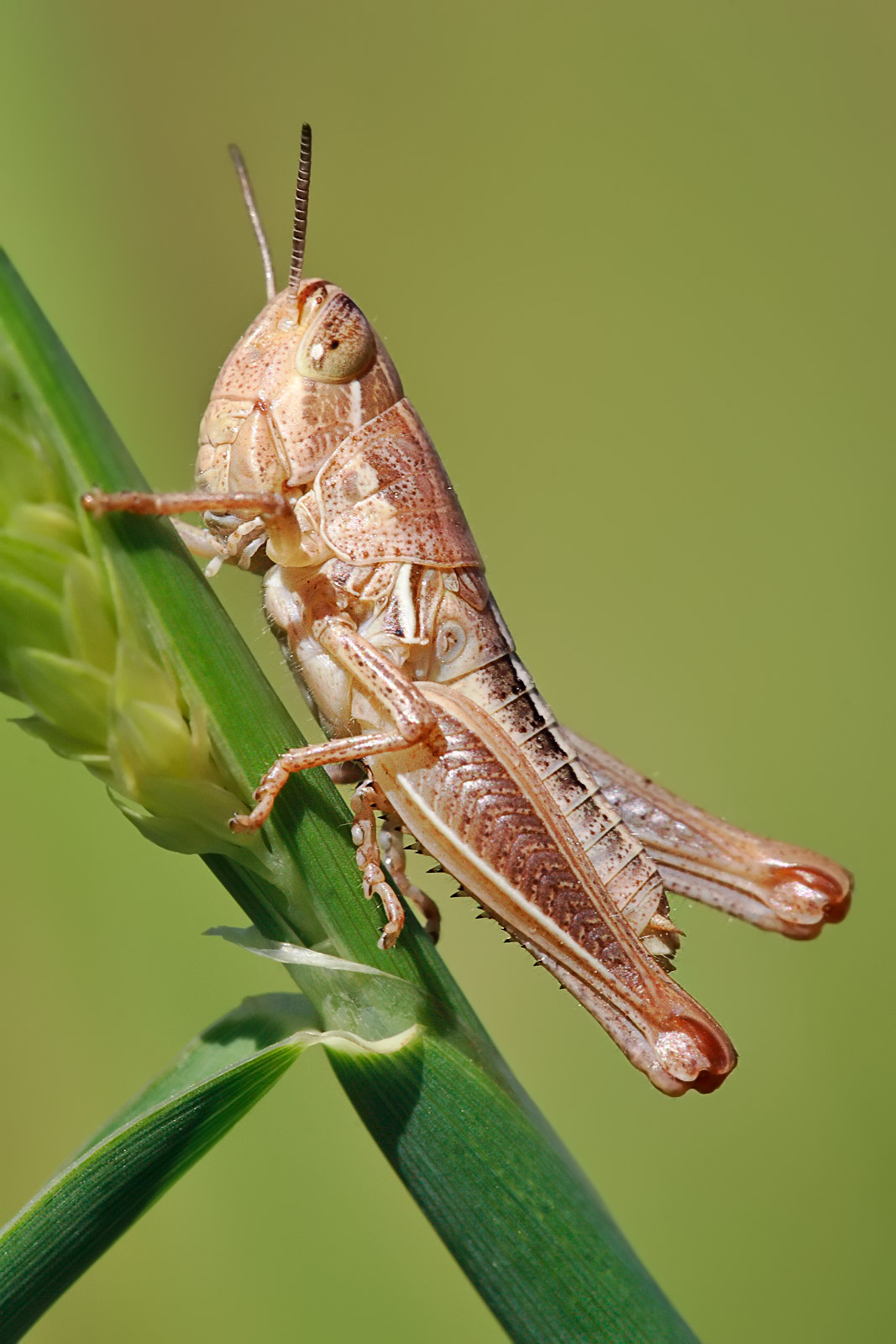 Grasshoppers are s of the suborder Caelifera in the order . To distinguish them from bush crickets or katydids, they are sometimes referred to as short-horned grasshoppers. Species that change colour and behaviour at high population densities are called s.

Grasshoppers have antennae that are almost always shorter than the body (sometimes filamentous), and short s. Those species that make easily heard noises usually do so by rubbing the hind femurs against the forewings or abdomen (), or by snapping the wings in flight. Tympana, if present, are on the sides of the first abdominal segment. The hind femora are typically long and strong, fitted for leaping. Generally they are winged, but hind wings are membranous while front wings () are and not fit for flight. Females are normally larger than males, with short ovipositors. Males have a single unpaired plate at the end of the abdomen. Females have two pairs of valves ( triangles) at the end of the abdomen used to dig in sand when egg laying.

They are easily confused with the other sub-order of Orthoptera, , but are different in many aspects, such as the number of segments in their antennae and structure of the ovipositor, as well as the location of the tympana and modes of sound production. Ensiferans have antennae with at least 20-24 segments, and caeliferans have fewer. In evolutionary terms, the split between the Caelifera and the Ensifera is no more recent than the Permo-Triassic boundary (Zeuner 1939).

Recent estimates (Kevan 1982; Günther, 1980, 1992; Otte 1994-1995; subsequent literature) indicate some 2,400 valid Caeliferan genera and about 11,000 valid species described to date. Many undescribed species exist, especially in tropical wet forests. The Caelifera are predominantly tropical but most of the superfamilies are represented world wide.

The digestive system of insects includes a foregut (stomodaeum - the mouth region), a hindgut (proctodaeum - the anal region), and a midgut (mesenteron). The mouth leads to the muscular pharynx, and through the oesophagus to the crop. This leads to the malpighian tubules. These are the chief excretion organs. The hindgut includes intestine parts (including the ileum and rectum), and exits through the anus. Most food is handled in the midgut, but some food residue as well as waste products from the malpighian tubules are managed in the hindgut. These waste products consist mainly of , and a bit of s, and are normally converted into dry pellets before being disposed of.

The salivary glands and midgut secrete digestive s. The midgut secretes , , , and , among other enzymes. The particular ones secreted vary within the different diets of grasshoppers.

The grasshopper's nervous system is controlled by ganglia, loose groups of nerve cells which are found in most species more advanced than cnidarians. In grasshoppers, there are ganglia in each segment as well as a larger set in the head, which are considered the . There is also a in the centre, through which all ganglia channel signals. The sense organs (sensory neurons) are found near the exterior of the body and consist of tiny hairs (), which consist of one sense cell and one nerve fibre, which are each specially calibrated to respond to a certain stimulus. While the sensilla are found all over the body, they are most dense on the antennae, palps (part of the mouth), and cerci (near the posterior). Grasshoppers also have s for sound reception. Both these and the sensilla are linked to the brain via the neuropile.

The grasshopper's reproductive system consists of the gonads, the ducts which carry sexual products to the exterior, and accessory glands. In males, the testes consist of a number of follicles which hold the spermatocytes as they mature and form packets of elongated spermatozoa. After they are liberated in bundles, these spermatozoa accumulate in the vesicula seminalis (vas deferens).

In females, each ovary consists of ovarioles. These converge upon the two oviducts, which unite to create a common oviduct which carries ripe eggs. Each of the ovarioles consists of a germarium (a mass of cells that form s, s, and follicular cells) and a series of follicles. The nurse cells nourish the oocytes during early growth stages, and the follicular cells provide materials for the yolk and make the eggshell (chorion).

During reproduction, the male grasshopper introduces sperm into the ovipositor through its (reproductive organ), and inserts its , a package containing the sperm, into the female's . The sperm enters the eggs through fine canals called micropyles. The female then lays the fertilized egg pod, using her ovipositor and abdomen to insert the eggs about one to two inches underground, although they can also be laid in plant roots or even manure. The egg pod contains several dozens of tightly-packed eggs that look like thin rice grains. The eggs stay there through the winter, and hatch when the weather has warmed sufficiently. In temperate zones, many grasshoppers spend most of their life as eggs through the cooler months (up to 9 months) and the active states (young and adult grasshoppers) live only up to three months. The first nymph to hatch tunnels up through the ground, and the rest follow. Grasshoppers develop through stages and progressively get larger in body and wing size. This development is referred to as hemimetabolous or incomplete metamorphosis since the young are rather similar to the adult.

Grasshoppers have open circulatory systems, with most of the body fluid (haemolymph) filling body cavities and appendages. The one closed organ, the dorsal vessel, extends from the head through the thorax to the hind end. It is a continuous tube with two regions - the heart, which is restricted to the abdomen, and the aorta, which extends from the heart to the head through the thorax. Haemolymph is pumped forward from the hind end and the sides of the body through a series of valved chambers, each of which contains a pair of lateral openings (ostia). The haemolymph continues to the aorta and is discharged through the front of the head. Accessory pumps carry haemolymph through the wing veins and along the legs and antennae before it flows back to the abdomen. This haemolymph circulates nutrients through the body and carries metabolic wastes to the malphighian tubes to be excreted. Because it does not carry oxygen, grasshopper "blood" is green.

Respiration is performed using tracheae, air-filled tubes, which open at the surfaces of the thorax and abdomen through pairs of s. The spiracle valves only open to allow oxygen and carbon dioxide exchange. The tracheoles, found at the end of the tracheal tubes, are insinuated between cells and carry oxygen throughout the body. "(For more information on respiration, see .)"

In many places around the world, grasshoppers are eaten as a good source of . In Mexico for example "" are used as a snack or filling. It is found on skewers in Chinese food markets, like the [ Bizarre Foods with Andrew Zimmern aired on 27 April 2008. ]

Raw grasshoppers should be eaten with caution, as they can contain tapeworms. [ television show, Sonoran Desert episode, broadcasted on 1 November 2006]

Locusts are several species of s of the family that sometimes form very large groups (swarms); these can be highly destructive and migrate in a more or less coordinated way. Thus, these grasshoppers have solitary and gregarious (swarm) phases. Locust swarms can cause massive damage to crops. Important locust species include "" and "" in Africa and the Middle East, and "" in tropical Mexico and Central America ( [Mesoamerica] ). Other grasshoppers important as pests (which, unlike true locusts, do not change colour when they form swarms) include "" species (like "M. bivittatus", "M. femurrubrum" and "M. differentialis") and "" in North America; the "", and "" in Northern and Central Mexico; species of "" in South America; and the "Oedaleus senegalensis" and the "Zonocerus variegatus" in Africa.

* In ancient , , prince of Troy; son of Laomedon was loved by the dawn goddess , who bore him and . When Eos begged to bestow immortality upon Tithonus, she forgot to ask the god to grant her lover eternal youth; so Tithonus grew older and older until Eos, out of pity, changed him into a grasshopper.

* (620–560 BC), a slave and story-teller who lived in Ancient Greece told a tale called . In this tale, the ant worked hard preparing his shelter and stores of food all summer, while the grasshopper played. Once the winter came, the ant was prepared and the grasshopper, having no shelter or food begs to enter the ant's house. The ant refuses and the grasshopper starves to death.

* "Grasshopper" is a term currently used in jest referencing an inexperienced person who has much to learn. Its use originating from the television show "Kung Fu" (1972-1975) in which the student, Young Caine, portrayed by is taking instruction from his Master Po portrayed by who nicknamed his student "Grasshopper" as a term of endearment.

* In the 1998 movie "", in an apparent homage to the Aesop fable, , where the heroes are the members of an ant colony, and the lead villain and his henchmen are grasshoppers, the lead villain is then eaten by a bird.

* The Japanese franchise "" originally had a grasshopper motif, with a grasshopper based helmet and costume. This was later toned down in favour of other motifs in more recent Kamen Rider series, though some features of the original hero remain ('bug eyes').

* In the Sci-Fi Series Farscape Criton always referred to Scorpios as Grasshopper.