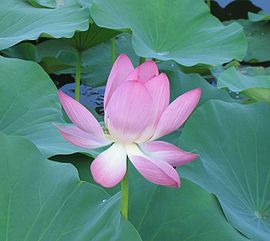 The lotus symbolizes non-attachment in some religions in Asia owing to its ability to soar over the muddy waters and produce an immaculate flower.

Detachment, also expressed as non-attachment, is a state in which a person overcomes his or her attachment to desire for things, people or concepts of the world and thus attains a heightened perspective.

Importance of the term

Detachment as release from desire and consequently from suffering is an important principle, or even ideal, in the Bahá'í Faith, Buddhism, Christianity, Hinduism, Judaism, Jainism, Kabbalah and Taoism.

In Buddhist and Hindu religious texts the opposite concept is expressed as upādāna, translated as "attachment". Attachment, that is the inability to practice or embrace detachment, is viewed as the main obstacle towards a serene and fulfilled life. Many other spiritual traditions identify the lack of detachment with the continuous worries and restlessness produced by desire and personal ambitions.

"Thou hast inquired about detachment. It is well known to thee that by detachment is intended the detachment of the soul from all else but God. That is, it consisteth in soaring up to an eternal station, wherein nothing that can be seen between heaven and earth deterreth the seeker from the Absolute Truth. In other words, he is not veiled from divine love or from busying himself with the mention of God by the love of any other thing or by his immersion therein."

The second definition is in the Words of Wisdom: "The essence of detachment is for man to turn his face towards the courts of the Lord, to enter His Presence, behold His Countenance, and stand as witness before Him." (Tablets of Baha'u'llah, p155)

Regarding the concept of detachment, or non-attachment, Buddhist texts in Pali mention Nekkhamma, a word generally translated as "renunciation". This word also conveys more specifically the meaning of "giving up the world and leading a holy life" or "freedom from lust, craving and desires."[1]

The writings of Milarepa, are canonical Mahayana Buddhist texts that emphasize the temporary nature of the physical body and the need for non-attachment.

Detachment is a central concept in Zen Buddhist philosophy. One of the most important technical Chinese terms for detachment is "wú niàn" (無念), which literally means "no thought." This does not signify the literal absence of thought, but rather the state of being "unstained" (bù rán 不然) by thought. Therefore, "detachment" is being detached from one's thoughts. It is to separate oneself from one's own thoughts and opinions in detail as to not be harmed mentally and emotionally by them.[2]

The Ignatian emphasis of Christian spirituality emphasizes interior freedom. To choose rightly, we should strive to be free of personal preferences, superfluous attachments and preformed opinions. St. Ignatius of Loyola counseled radical detachment: “We should not fix our desires on health or sickness, wealth or poverty, success or failure, a long life or a short one.” Our one goal is the freedom to make a wholehearted choice to follow God. Most Christian denominations never mention detachment in general.

The Hindu view of detachment comes from the understanding of the nature of existence and the true ultimate state sought is that of being in the moment. In other words, while one is responsible and active, one does not worry about the past or future. The detachment is towards the result of one's actions rather than towards everything in life. This concept is cited extensively within Puranic and Vedic literature, for example:

One who performs his duty without attachment, surrendering the results unto the Supreme Lord, is unaffected by sinful action, as the lotus is untouched by water.
—Bhagavad Gita 5.10:

The Tao Te Ching expressed the concept (in chapter 44) as:

Fame or Self: Which matters more? Self or Wealth: Which is more precious? Gain or Loss: Which is more painful? He who is attached to things will suffer much. He who saves will suffer heavy loss. A contented man is rarely disappointed. He who knows when to stop does not find himself in trouble. He will stay forever safe.