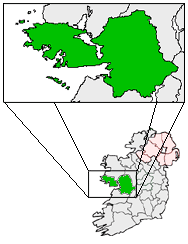 Spiddal, (official name: An Spidéal), is a village on the shore of in in Ireland. The town is 19 km (12 miles) west of city on the R336 road. Spiddal is located on the edge of the (Irish-speaking district), west of the city of Galway, and is a tourist centre with a sandy beach and shore fishing. Thousands of tourists visit the area every year, most of them being from or .

Every summer groups of teenagers come to Spiddal for 3 week Irish language (Gaelic) courses. Signposts are in the Irish language exclusively, as elsewhere in the Gaeltacht, but unlike the rest of where bilingual Irish-English signs are the norm. English is slowly creeping into the town, however Irish remains the community language. Since the town is so close to it has inherited many people from the city and this has led to a reduction in the use of the Irish language. Another reason for the reduction is the fact that the local people themselves have stopped speaking the language. The soap is set in Spiddal. Well-known people to come from Spiddal include and .

The town has 2 shops (one with a petrol station), and 4 restaurants (including a Supermac's franchise outlet). There are also a number of pubs in the town. On most weekend nights and sometimes during the week in summer time there is live traditional Irish music in the pubs. Hughes' pub in the centre of the village hosts traditional music sessions where famous musicians sometimes play. The pub An Crúiscín Lán was another music venue but it was recently transformed into a hotel by John Foye. The Boluisce, named after a local lake, is another popular pub-restaurant for seafood. Once a year, Spiddal welcomes 25 American students spending a semester abroad at the nearby Park Lodge Hotel. The students, from the College of Saint Benedict and Saint John's University in Collegeville Township, Minnesota, spend a the autumn months studying Gaelic literature and culture.

The local club is (Spiddal GAA club). and are the dominant sports in Spiddal however, there are also and sailing clubs in the town.