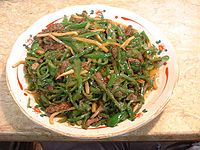 Evidence for the dish's existence in the United States dates from at least 1948.[1] The dish originated from Fujian cuisine, where it was known as qīngjiāo ròusī (青椒炒肉絲)[1]. In the original dish the meat that was used was pork and the seasonings were relatively light compared to pepper steak.