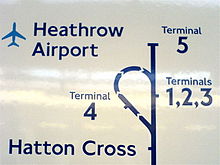 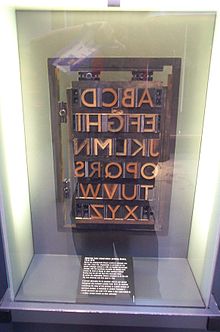 Johnston (or Johnston Sans) is a humanist sans-serif typeface designed by and named after Edward Johnston. It is well known for its use by Transport for London.

Johnston's former student Eric Gill also worked on the development of the typeface,[1] which was later to influence his own Gill Sans typeface, produced 1928–32.

Features of the font are the perfect circle of the letter O and the use of a diagonal square dot above minuscule letters i and j and for the full stop. Commas, apostrophes and other punctuation marks are also based on the diagonal square dot. The capitals of the typeface are based on Roman square capitals, and the lower-case on the humanistic minuscule, the handwriting in use in Italy in the fifteenth century. In this, it marked a break with the kinds of sans serif previously used, sometimes known as grotesque, which tended to have squarer shapes.

The typeface was commissioned in 1913 by Frank Pick, Commercial Manager of the Underground Electric Railways Company of London (also known as 'The Underground Group'), as part of his plan to strengthen the company's corporate identity, and introduced in 1916.[2] Pick specified to Johnston that he wanted a typeface that would ensure that the Underground Group's posters would not be mistaken for advertisements; it should have "the bold simplicity of the authentic lettering of the finest periods" and belong "unmistakably to the twentieth century".[3] In 1933, The Underground Group was absorbed by the London Passenger Transport Board and the typeface was adopted as part of the London Transport brand.

The font family was originally called Underground. It became known as Johnston's Railway Type, and later simply Johnston. It comes with two weights, heavy and ordinary. Heavy does not contain lower-case letters.

The Johnston typeface was redesigned in 1979 by Eiichi Kono at Banks & Miles to produce New Johnston, the variant of the original typeface currently used by London Underground. The new typeface is slightly heavier or bolder than the original. The new family comes with Bold, Medium, Light weights. The new typeface replaced the old typeface.

A further change occurred in 2008 when Transport for London removed the serif from the numeral '1' and also altered the '4', in both cases reverting these to their original appearance.

The original font was developed in the 1920s by Percy Delf Smith (another former pupil of Edward Johnston). It was commissioned by Frank Pick of London Underground as a 'petit-serif' variation of the organisation's standard sans-serif Johnston face. The typeface was originally used for the headquarters building at 55 Broadway, SW1.

It can still be seen on some signs at Sudbury Town and Arnos Grove on the Piccadilly line.

In early 2007, an electronic version of the typeface was developed under the name Johnston Delf Smith, specifically for use on historic signs.

International Typeface Corporation released a variant in 1999 called ITC Johnston, produced by British type designers Richard Dawson and Dave Farey. It originally included three font weights like New Johnston. However, it does not include the hooked 1 and uses side-pointed 4.

In November 2002, the typeface was rereleased in OpenType format, which also expanded the font family to include italic fonts in all weights. Character set was expanded to support ISO Adobe 2 character set. OpenType features include alternates, case forms, small caps (romans only), old style figure. Separate small caps (romans only) and old style figure faces were also released for each weight in TrueType and PostScript formats, for a total of fifteen typefaces.

Its use has included the Tube map, nameplates and general station signing, as well as much of the printed material issued by the Underground Group and its successors; also by the nationalised British Road Services in the immediate post-war era.