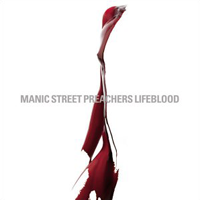 "Lifeblood" is the seventh studio album by . It was recorded in New York and Wales by , and frequent collaborator .

The album includes a song about a leader in the British movement ("Emily") but otherwise the band's earlier political lyrics have been replaced by personal reflection such as on the band's past ("1985") and former member ("Cardiff Afterlife"). The album was also a departure musically, replacing the band's traditional guitar walls with more subtle and melodic playing, emphasis instead being given to keyboards and synthesizers. This results in a softer sound, something described as "elegiac pop" throughout the recording process.

"" was the second single released and like the previous single, it debuted and peaked at #2 on the . No further singles were released. Two tracks recorded during the Lifeblood recording sessions ("Antarctic" and "The Soulmates") remain only on the Japanese version of the album.

A Song For Departure was thought to be the third and last single from the album, as they performed the song on Later with Jools and was more Rock-like, but they wanted to have a break and were disappointed with the album.

The of this album was , hinting that the song 'Litany' recorded during the Lifeblood sessions was originally intended for inclusion. The track however only featured as a b-side to the CD-Single. The title LifeBlood is a reference to the lyric "My life-blood spills over" from the Rush song 2112.