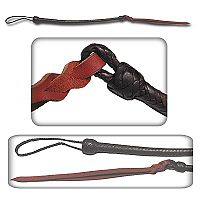 A quirt is a forked type of stock whip which usually has two falls at the end (like the tails on some tawses). Sometimes called a riding quirt, horse quirt, or a dog quirt.

The falls on a quirt are made of leather, buffalo, or cow hide. The core of the quirt is usually a leather bag filled with lead shot, the main part including the handle is often made from braided rawhide, leather or kangaroo hide and is usually somewhat stiff but flexible.[1]

The old style horse quirt is still carried by some Western horsemen, and this is the style of quirt seen in the early Western cowboy films.

The quirt, due to its slow action, is not particularly effective as a riding aid for horses, though at times it has been used as a tool of punishment. Rather, it is an effective tool to slap or goad cattle from horseback.

In the vaquero tradition, a quirt with a long handle, known as a romal, was attached to the end of a closed set of reins. The romal was primarily used as a noisemaker to slap or goad cattle. (The handle made it too slow and of the wrong length for use on the horse.) This combination of romal and closed reins, today referred to as romal reins, or romal-style reins, is seen primarily in the horse show ring in certain types of western pleasure classes.

Quirt Evans is the name of John Wayne's character in the 1947 film Angel and the Badman.