Erastus "Deaf" Smith (April 19, 1787– November 30, 1837) was an American frontiersman noted for his part in the Texas Revolution and the army of the Republic of Texas. He fought at the Grass Fight and the Battle of San Jacinto. After the war, Deaf Smith led a company of Texas Rangers.

Smith was born in Dutchess County, New York. He was the son of Chilab and Mary Smith. In 1798, his family moved to near Natchez, Mississippi, where the Grand Gulf Nuclear Generating Station is currently located. He came to Texas in 1821 for health reasons but returned to Natchez in 1822. His health apparently recovered except for a partial loss of hearing, hence the nickname "Deaf" Smith, pronounced "Deef Smith." Smith, also known as "El Sordo," appeared in many areas of Mexican Texas and was in most significant actions related to development of the region both under Mexico and during evolution of independence. At San Jose Mission, he introduced a fine stock of Muley cattle from Louisiana to the San Antonio area, where the Longhorn breed was previously popular. He used San Antonio de Bexar as a base. Smith's family lived at the southwest corner of Presa and Nueva Streets in San Antonio de Bexar.

In 1822, Smith married a Tejana, Guadalupe Ruiz Duran (b. 12 December 1797), the widow of Jose Maria Vincente Duran (m. 1812; children: Refugia, Josefa, Lucinda). The couple had four children, Susan Concepcion (b. 15 Aug 1823; d. 22 Jan 1849), Gertrudes (b. 1825; m. Macario Tarin), Travis (b. 1827; d. 1833 cholera) and Simona (b. 28 Oct 1829 in Mission Espada; d. 11 Nov 1890). Susan C. Smith married Nathaniel Fisk (b. 4 Sep 1815 Scranton, VT; d. 5 Apr 1876) in 1839. After her death, Fisk married her sister Simona Smith on 1 Aug 1849. Guadalupe Ruiz Duran Smith was the daughter of Salvador "Bernardino" Ruiz de Castaneda and Maria Ignacia Robleau. The Ruiz de Castaneda family were from San Luis de la Paz, Querétaro, New Spain. Salvador was a horse trader in Louisiana and then settled in San Antonio near Mission San Jose, after France regained control of Louisiana. Maria Ygnacia was born on the Los Adaes Mission in Natchitoches Parish, Louisiana. Her father, Pierre Robleau, was said to have been a political refugee from France or Canada, while her mother Maria Isidora de Cepeda was the daughter of a Spanish soldier stationed at Mission Los Adaes.

Even as many Texas settlers formed an army and marched on San Antonio de Bexar, Smith originally intended to remain neutral. He changed his mind after the Texian Army, led by Stephen F. Austin, initiated a siege of Bexar. As the siege began, Smith and his son-in-law Hendrick Arnold were absent from town, on a hunting trip. The Mexican army increased security in the town, and refused to allow Smith and Arnold to return to their homes within the city. An indignant Smith immediately joined the Texian Army. He wrote to Austin: "I told you yesterday that I would not take sides in this war but, Sir, I now tender you my services as the Mexicans acted rascally with me".[1]

His intelligence gathering was important at the Battle of Concepcion. In October 1835, he discovered the mule train that brought on the Grass Fight and in December 1835 he guided troops into San Antonio in the Siege and Battle of Bexar where he was wounded atop the Veramendi House at the same time that Ben Milam was killed. After the evacuation of centralista troops from San Antonio in the latter engagement, he moved his family to Columbia. At the Alamo, he served as a courier to William Barrett Travis and carried Travis's letter from the Alamo on February 15, 1836. He met General Sam Houston at Gonzalez after the signing of the Texan Declaration of Independence at Washington-on-the-Brazos, Texas. Dispatched back to Bexar, Houston relied on Smith to determine the fate of the Alamo garrison. He met and escorted Mrs. Almeron Dickinson and party to report to General Houston in Gonzales regarding the fate of the Alamo defenders.

In Gonzales, Smith was assigned to Captain Karnes' Cavalry Company of the 1st Regiment of Volunteers and placed in command of new recruits. Smith operated continuously on the way to, at, and after the Battle of San Jacinto with small groups of volunteers from the cavalry unit and sometimes other units, successfully generating intelligence and special missions almost continuously.[2] At Harrisburg, he captured a [[Mexican people the means of any retreat or reinforcements of both armies. He joined his unit to participate in the main battle. He was the courier that took the captured Antonio López de Santa Anna's orders to General Filisola's army to retreat from Texas. He captured General Cos, who had escaped from the main battle.

After the Battle of San Jacinto, Deaf Smith returned to Columbia and later moved to Richmond in Fort Bend County. Shortly before his death, Smith raised a company of twenty Texas Rangers, who fought on March 17, 1837, near what is now the Laredo International Airport in Laredo, against a superior Mexican force. Two of Smith's men were wounded, and ten Mexicans were killed and ten others injured. Smith also captured forty horses. This incident occurred nearly a year after General Lopez de Santa Anna had surrendered at San Jacinto to General Sam Houston. Smith at the time offered no further resistance against the Mexicans, and he guided the Texans back to San Antonio. 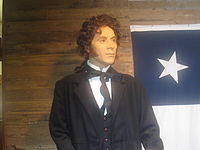 Deaf Smith as he appears at the Childress County Heritage Museum in Childress, Texas

The Republic of Texas legislature in November 1836, had granted Smith "any house and lot in the city of Bexar, which may be confiscated for public use". Smith died in Richmond, Texas, at age of fifty, at the home of Randall Jones. He is buried in the Episcopal churchyard with a modest marker, "Deaf Smith, The Texas Spy, Died Nov. 30, 1837." His widow chose the old Granado homeplace at the southeast corner of Main Plaza and Commerce Street in San Antonio. Smith was also granted land for his service to the Texas Republic. His widow returned to San Antonio, died there on May 1, 1849, and is interred at the Catholic Cemetery. 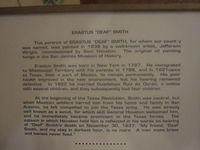 Deaf Smith County, Texas is named in his honor, and like the pronunciation of his nickname, is spoken as "Deef". Likewise, a brand of peanut butter known as Deaf Smith was manufactured by the Arrowhead Mills company, which was founded in 1960 by Frank Ford, then from Hereford, the seat of Deaf Smith County.

Smith is also honored for his work in South Texas with a historical marker at the entrance to Lake Casa Blanca International Park in Laredo.