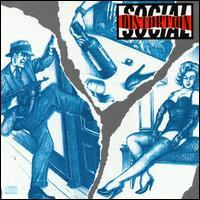 "Social Distortion" is the third and self-titled album by punk group , which was released on , as their first album on . It furthered the experimentation of 1988's "" with songs like "Drug Train" and the radio hit "Ball and Chain." It is widely considered to be their best releaseFact|date=June 2008, and it includes their most well-known songs "Story of My Life" and "Ball and Chain".

All songs written by unless otherwise noted.