Jungle warfare is a term used to cover the special techniques needed for military units to survive and fight in jungle terrain.

It has been the topic of extensive study by military strategists, and was an important part of the planning for both sides in many conflicts, including World War II and the Vietnam War.

The jungle environment has a variety of effects on military operations. Dense vegetation can limit lines of sight and arcs of fire, but can also provide ample opportunity for camouflage and plenty of material with which to build fortifications.

Jungle terrain, often without good roads, can be inaccessible to vehicles and so makes supply and transport difficult, which in turn places a premium on air mobility. The problems of transport make engineering resources important as they are needed to improve roads, build bridges and airfields, and improve water supplies.

Jungle environments can also be inherently unhealthy, with various tropical diseases that have to be prevented or treated by medical services. Likewise the terrain can make it difficult to deploy armoured forces, or any other kind of forces on any large scale. Successful jungle fighting emphasises effective small unit tactics and leadership.

At the start of the war in the Far East the Japanese were able to advance on all fronts. In Malayan Campaign time and again they infiltrated through the jungle to bypass static British positions based on road blocks so that they could cut the British supply line and attack the British defences from all sides.

In early 1942 the fighting in Burma at the start of the Burma Campaign took on a similar aspect and resulted in the longest retreat in British military history.[1] Most member of the British and Indian army left Burma with the belief that in the jungle the Japanese were unstoppable. The first action to start to dispel this myth of invincibility would come from the actions of the Chindits.

The Chindits were a special force 3,000 which in February 1942 launched a deep penetration raid, (codenamed Operation Longcloth) into Japanese occupied Burma. They went in on foot using mules to carry supplies. The operation was not a military success, but was a propaganda boost for the Allies, because it showed that Allied forces could successfully move and fight in jungle terrain well away from roads. On the back of the propaganda success, Orde Wingate, the eccentric commander of the Chindits, was given the resources to increase his command to divisional size and the USAAF supplied the 1st Air Commando Group to support his operations. The availability of air transport revolutionised Wingate's operational choices. In February 1944 Operation Thursday was launched, and air transport support supplied 1st Air to allow the Chindits to set up air supplied bases deep behind enemy lines from which aggressive combat patrols could be sent out to interdict Japanese supply lines and disrupt rear echelon forces. This in turn forced the Japanese 18th Division to pull front-line troops from the battle against X Force which was advancing through Northern Burma to protect the men building the Ledo Road. When the Japanese closed on a base and got within artillery range the base could be abandon and a new base set up in another remote location. The ability to sustain the bases that relied totally on air power and in the coming decades would prove a template for may similar operations.

After the first Chindits expedition, thanks to the training the regular forces were receiving and the example of the Chindits and new divisional tactics, the regular units of the Fourteenth Army started to get the measure of both the jungle and the enemy. When the Japanese launched their late 1943 Arakan offensive they infiltrated Allied lines to attack the 7th Indian Infantry Division from the rear, overrunning the divisional HQ. unlike previous occasions on which this had happened, the Allied forces stood firm against the attack and supplies were dropped to them by parachute. In the Battle of the Admin Box from 5 February to 23 February, the Japanese were unable to break through the heavily defended perimeter of the box. The Japanese switched their attack to the central front but again the British fell back into defensive box of Imphal, and the Kohima redoubt. In falling back to the defensive positions around Imphal the leading British formations found their retreat cut by Japanese forces, but unlike previously, they took that attitude that if the Japanese where behind them then they were just as cut of as the British. The situation maps of the fighting along the roads leading to Imphal resembled a slice of marble cake as both sides used the jungle to outflank each other. Another major change by the British was that use of air support both as an offensive weapon to replace artillery, and as a logistical tool to transport men and equipment. For example the 5th Indian Infantry Division was airlifted strait from the now quieter Arakan front up to the central front and were in action within days of arriving. By the end of the campaigning season both Kohima and Imphal had been relieved and the Japanese were in full retreat.

The lessons learnt in Burma of how to fight in the jungle and how to use air transport to move troops around would lay the foundations of how to conduct large scale jungle campaigns in future wars.

Immediately after the fall of Malaya and Singapore in 1942, a few British officers, such as the legendary Freddie Spencer Chapman, eluded capture and escaped into the central Malaysian jungle where they helped organize and train bands of lightly armed local ethnic Chinese communists into a capable guerrilla force against the Japanese occupiers. What began as desperate initiatives by several determined British officers probably inspired the subsequent formation of the above-mentioned early jungle-warfare forces.

The real pioneers who methodically developed it as a specialized branch of warfare - the unconventional, low-intensity, guerrilla-style type of warfare as it is understood today - were probably the British and Australians. V Force and Force 136 were composed of small bodies of soldiers and irregulars, equipped with no more than small arms and explosives, but rigorously trained in guerrilla warfare-style tactics (particularly in close-quarter combat) who fought behind enemy lines. They the were joined in Burma by American lead Kachin guerrillas were armed and coordinated by the American liaison organisation, OSS Detachment 101 that lead armed and coordinated them.

Another small force operating in the Far East was the Australian lead Z Special Unit that carried out a total of 81 covert operations in the South West Pacific theatre some of which involved jungle warfare.

British experience in the Malayan Emergency

After the war, early skills in jungle warfare were further honed in the Malayan Emergency, when in 1948 W.W.II guerrilla fighters of the Malayan Communist Party (MCP) turned against the Commonwealth. In addition to jungle discipline, field craft, and survival skills, special tactics such as combat tracking (first using native trackers), close-quarter fighting (tactics were developed by troopers protected only with fencing masks stalking and shooting each other in the jungle training ground with air rifles), small team operations (which led to the typical four-man special operations teams) and tree jumping (parachuting into the jungle and through the rain forest canopy) were developed from Borneo's Iban native to actively take the war to the Communist guerrillas instead of reacting to incidents initiated by them.

Of greater importance was the integration of the tactical jungle warfare with the strategic "winning hearts and minds" psychological, economic and political warfare as a complete counter-insurgency package. The Malayan Emergency was declared over in 1960 as the surviving Communist guerrillas were driven to the jungle near the Thai border, where they remained until they gave up their armed struggle in 1989. 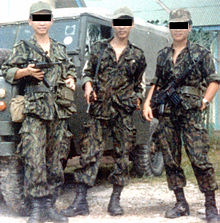 The British experience in counter insurgency was passed onto the Americans during their involvement in the Vietnam War,[2] where the battlegrounds were, again, the jungle. Much of British strategic thinking on counter-insurgency tactics in a jungle environment was passed on through BRIAM (British Advisory Mission) to South Vietnam headed by Sir Robert Thompson, a former Chindit and the Permanent Secretary of Defense for Malaya during the Emergency).[3]

During the decade of active US combat involvement in the Vietnam War (1962–1972), jungle warfare became closely associated with counter insurgency and special operations troops.

However, although the American forces managed to have mastered jungle warfare at a tactical level in Vietnam, they were unable to install a successful strategic program in winning a jungle-based guerrilla war.[4][5][6] Hence, the American military lost the political war in Vietnam even though U.S. forces, especially special operations troops, won almost every major military battle against the Viet Cong guerrillas and the North Vietnamese Army. 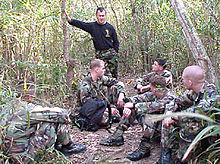 U.S. Marines training in the jungle

With the end of the Vietnam War, jungle warfare fell into disfavor among the major armies in the world, namely, those of the US/NATO and USSR/Warsaw Pact, which focused their attention to conventional warfare with a nuclear flavor, to be fought on the jungle-less European battlefields.

US special operations troops that were created for the purpose of fighting in the jungle environment, such as LRRP and CTT, were disbanded, while other jungle-warfare-proficient troops, such as the Special Forces and Rangers, went through a temporary period of decline, until they found their role in counter-terrorism operations in the 1980s.

Development after the Cold War

The collapse of USSR in the early 1990s marked the beginning of the end of a number of proxy wars fought between the superpowers in the jungles of Africa, South America and Southeast Asia. In the euphoria at the end of the Cold War, many Western nations were quick to claim the peace dividend and reinvested resources to other priorities.

Jungle warfare was reduced in scope and priority in the regular training curriculum of most conventional Western armies.[7] During this time, the nature of major military operations in the Middle East and Central Asia saw the need to put an emphasis upon desert warfare and urban warfare training - in both the conventional and unconventional warfare models.

Conflicts in Colombia, Ecuador and Peru

US Marines and Malaysian Rangers conducted jungle operations training as part of CARAT 2011.

At present the following armies have specialised jungle units or Jungle Troops: