World citizen
You may be looking for World Citizen (album)
This article is about the concept. For about the related award, see Citizen of the World. 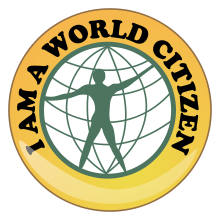 World citizen has a variety of similar meanings, often referring to a person who disapproves of traditional geopolitical divisions derived from national citizenship.

An early incarnation of this sentiment can be found in Socrates, who said, "I am not an Athenian, or a Greek, but a citizen of the world.".[1] The Tamil poet, Kaniyan Poongundran wrote in Purananuru, "To us all towns are one, all men our kin". In later years, political philosopher and Founding Father of the U.S.A. Thomas Paine would declare, "My country is the world, all men are my brethren and my religion is to do good." World citizenship has been promoted by distinguished people from Walter Cronkite[2] to Garry Davis, who has lived for 60 years as a citizen of no nation, only the world. Davis founded the World Service Authority in Washington, DC, which issues the World Passport (usually not considered a valid passport) to world citizens.[3]

In 1956 Hugh J. Schonfield founded the Commonwealth of World Citizens, later known by its Esperanto name "Mondcivitan Republic", which also issued a world passport; it declined after the 1980s.

The Bahá'í Faith promotes the concept through its founder's proclamation (in the late 19th century) that "The Earth is but one country, and mankind its citizens."[4] As a term defined by the Bahá'í International Community in a concept paper shared at the 1st session of the United Nations Commission on Sustainable Development, New York, U.S.A. on 14–25 June 1993.[5] "World citizenship begins with an acceptance of the oneness of the human family and the interconnectedness of the nations of 'the earth, our home.' While it encourages a sane and legitimate patriotism, it also insists upon a wider loyalty, a love of humanity as a whole. It does not, however, imply abandonment of legitimate loyalties, the suppression of cultural diversity, the abolition of national autonomy, nor the imposition of uniformity. Its hallmark is 'unity in diversity.' World citizenship encompasses the principles of social and economic justice, both within and between nations; non-adversarial decision making at all levels of society; equality of the sexes; racial, ethnic, national and religious harmony; and the willingness to sacrifice for the common good. Other facets of world citizenship—including the promotion of human honour and dignity, understanding, amity, co-operation, trustworthiness, compassion and the desire to serve—can be deduced from those already mentioned."[5]

In a non-political definition, it has been suggested that a world citizen may provide value to society by using knowledge acquired across cultural contexts.[6]

In some scenarios, a savvy businessperson who has travelled the world would be able to use knowledge about resources and products found abroad to create business where value can be maximised.