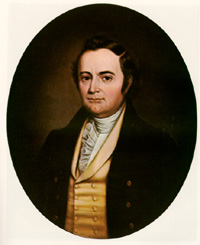 John W. Taylor (, – , ), was an early 19th century U.S. politician from . He was born in and received his first education at home.

Taylor graduated from with honors and served in the N.Y. legislature before being elected to Congress at age 28.

John Taylor served in the for 20 years, from 1813 to 1833, and served twice as Speaker of the House. He also was a representative of New York in the , where he took a stance against the extension of slavery along with people such as .

After leaving politics, Taylor practised law in and was elected to the N.Y. senate. He moved to after suffering a paralytic in 1843, and died in that city 11 years later. He was buried in Ballston Spa where he had practiced law.