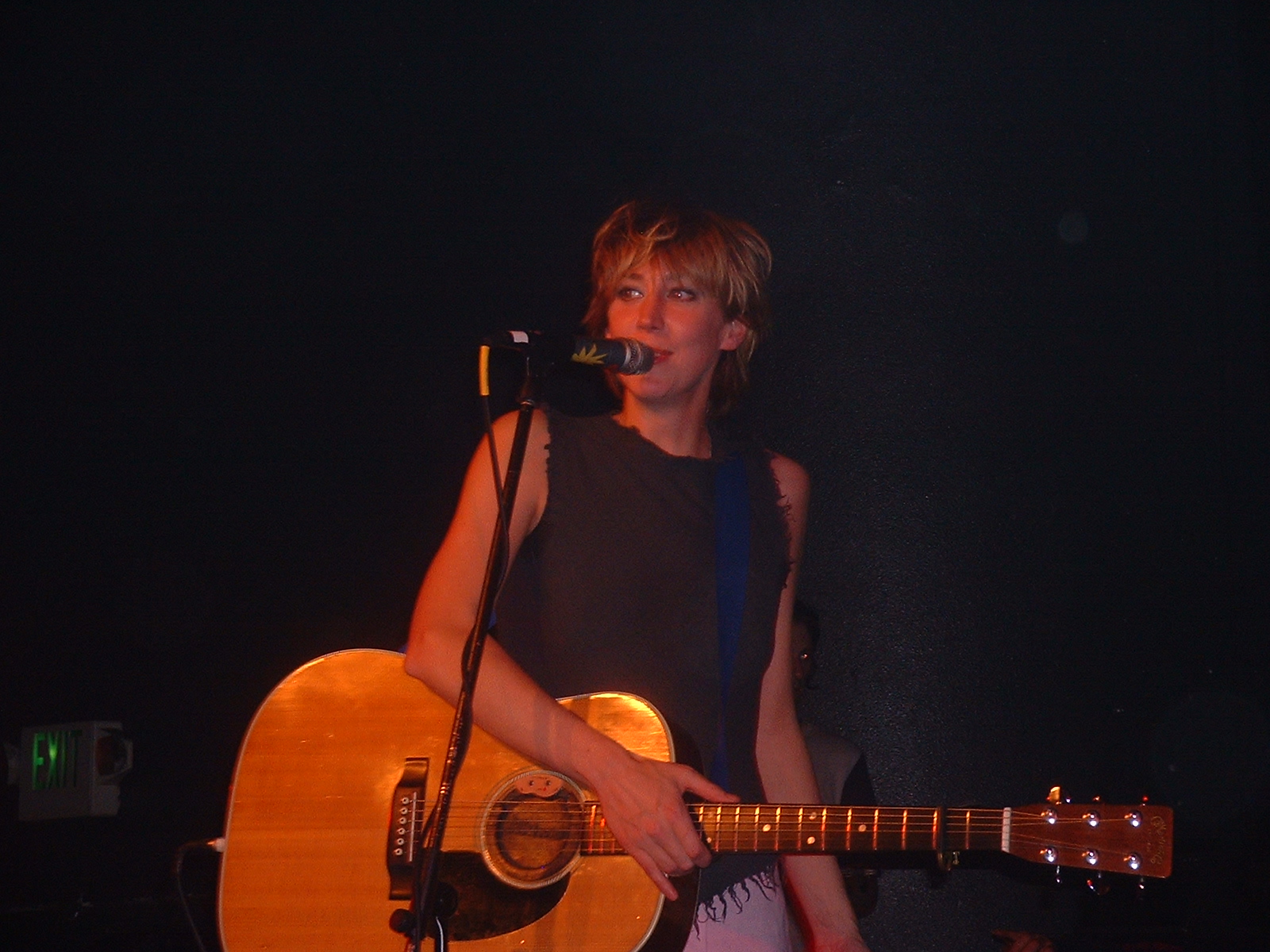 Elizabeth Caroline Orton, [cite web | work = ASCAP ACE | title = Search results| url = http://www.ascap.com/ace/search.cfm?requesttimeout=300&mode=results&searchstr=1556896&search_in=c&search_type=exact&search_det=t,s,w,p,b,v&results_pp=30&start=1 | accessdate = 2006-09-11 ] commonly known as Beth Orton, (born , ), is a BRIT Award–winning English . Known for her "folktronica" sound, which mixes elements of folk and , she was initially recognized for her collaborations with and the in the mid 1990s—but these were not Orton's first recordings. She released a solo album, "", in 1993. Since the album was only released in Japan, it went largely unnoticed by international audiences. Her second solo album, "Trailer Park", garnered much critical acclaim in 1996. With the release of the albums "Central Reservation" (1999) and the 2002 UK top 10 album "", Beth developed a devoted fan base. On her 2006 release, "," she has moved towards a more folk-based sound and away from the electronic sound of past albums.

American movies and TV shows such as "", "", "", "", "" and "" have featured her music and provided her with exposure to an American mainstream audience.

Orton was born in , , then raised on a pig farm in , before moving to East London at age fourteen. Her father, an architectural draftsman, left her mother when Beth was eleven, and she lived with her mother, an artist and political activist, and her two brothers, her father dying shortly afterwards. [Q Magazine, issue 56, page 202] ["Emotional Rescue", Daily Telegraph, , p32] Her mother died from cancer in 1989, when Beth was aged 19, ["Emotional Rescue", Daily Telegraph, , p35] , which led to her travelling to Thailand for a short period, residing with Buddhist nuns. Orton found success as a musician relatively late, having first worked at menial jobs such as waitressing at and even owning her own catering company. [An Interview With Beth Orton, Heavenly Recordings, BETH002, 1999] She was also more interested in acting during her early career, having enrolled at the Anna Scher Theatre School, and she spent some time touring with a fringe theatre company throughout the UK, Russia and Ukraine, playing Rimbaud's lover. [Beth Orton http://www.bethorton.mu/]

Her first contribution in music came when she met at a London nightclub, when he tried to borrow a cigarette from her. They began a relationship shortly after, and before long he invited her to do some spoken word for his current project, but she drunkenly decided to sing also. Possibly the best-known work from that time is "Water from a Vine Leaf", which she co-wrote and which was released as a limited-edition single. It was also at this time that Orbit and Orton covered John Martyn's "Don't Wanna Know 'Bout Evil", which was not only the first song that they recorded together, but also the first release as a duet called Spill in Japan, which was also re-released in 1997 in the UK.

Shortly after, Orton and Orbit began experimenting to pull an L.P. together. "Don't Wanna Know 'Bout Evil" was the first track on that album, called "SuperPinkyMandy", named after a rag doll which she bought at a at the age of six. [Morning Becomes Eclectic, first aired ] This rare album was released in alone, in extremely limited numbers (popularly quoted as between 1000 and 5000 copies pressed). The sound is very much Orbit's, but several songs were co-written, and some tracks were later recycled, in very different versions). "She Cries Your Name" later appeared on what she now considers her debut album ("Trailer Park"). "Yesterday's Gone" became "Montok Point" for the fourth Strange Cargo release "Hinterland" in 1995. That album featured Beth on several tracks as vocalist, and also included an alternative version of "She Cries Your Name".

It was roughly at this time that she met Ed and Tom of the in a pub, and began the first in a series of collaborations, supplying vocals to the track "Alive Alone" on 1995's "".

Her first solo release, a cover of ' "I Wish I Never Saw the Sunshine" was released, again in extremely limited numbers, in mid 1996, and was followed by "She Cries Your Name", shortly before the release of what she herself considers to be her debut L.P. "Trailer Park", released on on . This release earned her nominations for two (best British newcomer, best British female), and the in 1997, was well received by critics, and sold modestly well, shifting 300,000 copies and peaking at #68 in the UK. The album was produced by , whom she selected based on his production of one of her favourite records at the time, Primal Scream's Screamadelica. The album was far removed from her previous work, with a lot more pop/folk tunes present, although there were more than a few hints of her electronic roots. She began to tour this record, first supporting acts such as , and appearing with , before breaking out on her own. In June 1997, she had her first hit single, with a reissue of "She Cries Your Name".

She toured that summer with , as well as releasing the "" EP, improving on her previous best chart position, reaching #38 in the UK. "Central Reservation", her second album (proper), helped Orton build on the success of her debut. Although retaining the electronic edge of the former, this record showed a notably more acoustic side with several tracks consisting purely of Beth's vocal accompanied by a solitary acoustic guitar, with subject matters becoming more introspective, including "Pass in Time", a song about the death of her mother. Despite this style, the album still provided more polished moments such as lead single "Stolen Car" and the electro melancholy of "Stars All Seem to Weep", or the jazz-and-strings-tinged "Sweetest Decline", songs which cut a much deeper mark than the more glossy feel of her debut. The album also featured notable contributions from folk musician , Dr. Robert and . Two tracks were also produced by of .

The album earned Orton a second nomination and the Best Female Artist award at the 2000 .

In July 2002 she released the album "", which again blended the early electronica style, with up tempo pop songs and acoustic ballads. It featured guest appearances from musicians such as , , whom she met at Lilith Fair, and . It was a great commercial success, reaching the top 8 of the , but received largely positive from the press, ranging from "Her best work yet" from "Mojo" magazine, [New album reviews, Mojo Magazine, p.102,August 2002)] the "" (8/10), [New album reviews, "New Musical Express", p.33, ] "" [New album reviews, "Rolling Stone", p.72, 25 July, 2002] and "", but receiving a more lukewarm reception from "Q" [New album reviews, Q Magazine, p.132, August 2002] (Despite this she was nominated for the Q award for best album). This was followed in 2003 by an U.S. only release on American label Astralwerks, "", an album consisting mainly of b-sides and remixes of songs from "Daybreaker", created by artists such as Roots Manuva. She also contributed a song to the War Child charity, for their "Hope" compilation album that year.

A "best of" double album, entitled "", was released in 2003. It represented Orton's extensive and diverse musical career through previously unreleased songs, b-sides, and rarities (such as "Where Do You Go" from "Superpinkymandy"), as well as collaborations with and the . The highlight of her career arguably came on , when she played to a packed in London on the last date of her worldwide "Daybreaker" tour. In addition, she played a tribute concert to in November.

Orton's fourth studio album "" was released in February 2006. The North American release was through , and the UK release was through -UK. The release saw her move away from the electronica element that she is usually associated with, to a more stripped down traditional alt-folk album. This album followed an extended absence since her previous release, partially a result of several failed production attempts, and the parting of ways between her and Heavenly. [Beth Orton Bares All http://harpmagazine.com/articles/detail.cfm?article_id=3865] The album was produced by the musician Jim O'Rourke.

Her consistent band since 1999's "Central Reservation" has been guitarist , keyboardist Sean Read, ex-Sandals drummer Will Blanchard and former Red Snapper member on bass. However, this has changed, as Ali and Ted have moved on to form their own band , and in addition Ted has pursued his own projects, with Beth guesting on his solo debut album, Short Scenes. Only Sean remains in her current live band, although have played as the support act on both her UK and US tours to promote "Comfort of Strangers". Her current band consists of , drummer Matt Johnson and upcoming guitarist Emmett Kelly.

joined forces with Beth Orton and 22 other female artists to raise awareness of mother-to-child transmission of to unborn children in Africa. The single "Sing" was first released on on , , in conjunction with Annie Lennox's appearance at the concert in . [http://www.annielennoxsing.com] [http://www.myspace.com/annielennoxsing]

Beth is currently in pre production of her follow up album to "Comfort Of Strangers", the album is expected to be released in the winter of 2008.

Orton has been romantically linked with a number of high profile musicians, including and . [Smash it up!, http://www.blender.com/guide/articles.aspx?id=595, December 2003. Retrieved 11th September, 2006] Adams' songs "English Girls Approximately", "You Will Always Be The Same" & "Friends/For Beth" were written about her.

She is a well known opponent of the War on Terror, and played at the "One Big No" concert in March 2003 at the Shepherd's Bush Empire in London, organised by . [ One Big NO, anti-war gig, 2003, http://www.virtualfestivals.com/festivals/festival.cfm?eventid=3023&dbtable=event&section=eventhome retrieved ]

In the Telegraph interview she revealed that in the past she had shunned several opportunities to raise her public profile, on ethical grounds. Such opportunities included becoming the face of Calvin Klein, representing the Gap (which, according to some sources, use sweatshops to manufacture their clothes), and promoting the sales of her records at coffee outlets. While she is a supporter of , she has subsequently relented on this last stance.

All of her recent releases are "", whereby a tree is planted in a poor area of Mexico for every certain amount of units produced to offset the emissions generated when pressing the CDs, and other marketing paraphernalia. [Carbon Neutral http://www.carbonneutral.com/shop/details.asp?productid=823&productname=Dedicate%20a%20Tree:%20Beth%20Orton retrieved ]

She has also been offered the opportunity to return to her first love, acting. Having played the lead female in the independent film "", she was offered to audition for the role of John Cusack's girlfriend in the film "High Fidelity", but didn't accept the invitation (the part went to ). Beth also wrote music for the "Erin Brockovich" soundtrack. She does state that she would act, if an appropriate part came up for her.