The Order of Orange-Nassau (Dutch: Orde van Oranje-Nassau) is a military and civil order of the Netherlands which was created on 4 April 1892 by the Queen regent Emma of the Netherlands, acting on behalf of her under-age daughter Queen Wilhelmina. The Order is a chivalry order open to "everyone who have earned special merits for society". These are people who deserve appreciation and recognition from society for the special way in which they have carried out their activities.[1] The order is comparable with the Order of the British Empire in the UK.

In 1841 William II of the Netherlands, as Grand Duke of Luxembourg, created the Order of the Oak Crown. Although this was officially not a Dutch order, honours were regularly conferred on Dutch people. After the death of William III, Luxembourg became an independent state. There was a need for a third order, beside the military Order of William and Order of the Netherlands Lion, so that royal honours could be conferred upon foreign diplomats and people from lower ranks and classes.

In 1994, the Dutch honours system was extensively revised after almost thirty years of discussion. This revision by law intended to create a more democratic honour system, disconnecting the level of the honours from rank and social status. In principle, since then everyone in Dutch society can be honoured. An honour is only awarded on the basis of special, personal merits for society. Before this revision the Order consisted of five grades with additional Honorary Medals (gold, silver and bronze). The Honorary medals were only affiliated with the Order and bearers were not formally included in the Order. In 1996, the Honorary medals were abolished and replaced by the Member Class of the Order of Orange-Nassau, which is reserved only for Dutch citizens.

The Order of Orange-Nassau has two divisions, civil and military, the former denoted by a wreath of laurel on the badges, and the latter by crossed swords on both the badges and the stars.

The following grades exist for the Order of Orange-Nassau

Until 1996, the Order of Orange-Nassau consisted of five grades. In addition, Honorary medals were issued in gold, silver and bronze, which were only affiliated with the Order. The bearers of the medal were not included in the Order. Since 1996, the Honorary medals are not awarded anymore and have been replaced by the 6th grade "Member". 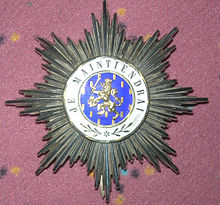 Star of a Grand Cross of the Order of Orange-Nassau

The badge of the Order is a blue-enamelled, white enamel-bordered Maltese Cross, in gilt for the officers and above, in silver for knights and members. The obverse central disc has the lion from the Dutch coat-of-arms of the Netherlands in gold and blue enamel, surrounded by a white enamel ring bearing the Dutch national motto Je Maintiendrai (I shall maintain). The reverse central disc has the crowned monogram "W" (for Queen Wilhelmina) surrounded by the motto God Zij Met Ons (God be with us). The badge hangs from a royal crown. The civil division has a wreath of laurel between the arms of the cross; the military division has crossed swords instead. The badge is attached to a ribbon which is orange with white and blue border stripes. The way the badge and ribbon should be worn differs between men and women.

The star of the Order is a silver star with straight rays, in 8 points for Grand Cross and in 4 points for Grand Officer; the central disc has the lion from the Dutch coat-of-arms of the Netherlands in gold and blue enamel, surrounded by a white enamel ring bearing the Dutch national motto Je Maintiendrai. The military division has crossed swords. 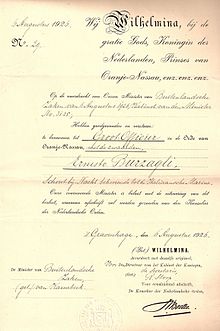 Certificate confirming that the Order of Orange-Nassau was conferred on Ernesto Burzagli in the name of Queen Wilhelmina of the Netherlands in 1926.