:"For the 1957 film see: Crime of Passion.Infobox film
name = Crimes of Passion 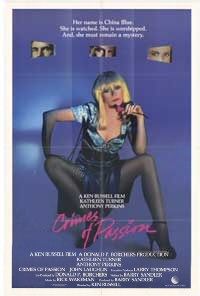 "Crimes of Passion" is a 1984 directed by starring , , John Laughlin and . The film explores themes of sexuality, failed relationships, and mental illness. [imdb title|id=0087100|title=Crimes of Passion.]

Bobby Grady (John Laughlin) is an ordinary middle-class electronics store owner who occasionally moonlights doing surveillance work. He attends a group therapy session because his wife, Amy (), has lost interest in sex and he fears their marriage is in trouble.

Grady is soon approached by the owner of a house to spy on an employee, Joanna Crane (), whom he suspects of selling clothing patterns to his competitors. Grady discovers the fears of Crane's boss are unfounded, but Crane is moonlighting as a street prostitute using the name "China Blue" and wearing a wig and provocative clothing as a disguise.

Grady tells the designer there is nothing to his suspicions, but keeps quiet about Crane's double life. After having an erotic encounter with Crane in her China Blue , Grady decides to start seeing her professionally, and later, romantically. However, their involvement is complicated by his guilt and her intimacy issues &mdash; not to mention her clientele of regular patrons and their bizarre sexual fetishes. Among them is the "Reverend" Peter Shayne (), who alternately spends his time delivering sermons on the street, visiting s while sniffing , and patronizing prostitutes. Shayne has begun seeing China Blue often and declares a misguided need to "save" her. (When he says, "Save your soul, whore!", she replies, "Save your money, shithead.") Underscoring Shayne's contradictory nature is the cache of sex toys he carries in a small doctor's bag with his .

Grady and Joanna's erotic encounters soon develop into genuine romantic feelings for each other. When Grady admits he may leave his wife and children, Joanna feels put-upon and depressed. She seeks solace in turning tricks because the encounters are not fraught with emotional entanglements. She dominates a young policeman in an session, penetrating him with his nightstick, and endures a botched three-way in a limousine. A session with an older, dying man whose wife wants China Blue to give him sexual gratification one last time inspires Joanna to reveal her real (first) name to the couple, suggesting she is the proverbial "".

Shayne grows increasingly psychotic: he carries a sharpened metallic he nicknames "Superman" and starts Joanna. He moves into a seedy motel next door to her nighttime place of business and watches her activities through a peephole. He also sets up a shrine with candles and numerous photos of her. Sensing that he is mentally unhinged, Joanna says she no longer wishes to see him, but Shayne follows her home to her actual apartment. Once there, he begs her to kill him.

The film ends with Grady addressing his group therapist about his new relationship with a woman named Joanna.

The film has a loud and -heavy score by rock musician , the majority of which is made up of melodies directly lifted from Czech 's "". Dvořák's 1893 symphony, a salute to the young , has no apparent thematic connection to the content of the movie; the use of this symphony may simply be a pun on the name of the company that made it, .

Wakeman has an uncredited role in the film as a wedding photographer.