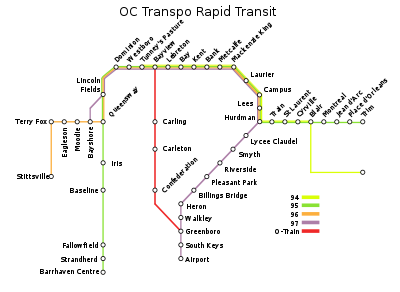 The Transitway is one of the most extensive and successful implementations of bus rapid transit, having begun service in 1983; many of the Transitway roads are above or below the grade of normal streets in Ottawa, by the use of overpasses, bridges, and trench highways. Thus, they rarely intersect directly with the regular traffic, and make it possible for the buses (and emergency vehicles) to continue at full speed even during rush hour. Buses that travel on the Transitway can cross very long distances (especially outside the downtown area) without stopping for a single traffic light. Most sections of the Transitway have a speed limit of 70–90 km/h (43–56 mph) between stations, and 50 km/h (31 mph) in the station areas.

The following routes are high-frequency routes that have a significant portion of their route along the Transitway:
(only bus only roads count as transitway; excluding all routes in Ottawa as transitway routes)
93 - Kanata North to Bayshore and Lebreton.
94 - Millennium to Woodroffe and Tunney's Pasture.
95 - Trim to Barrhaven Centre.
96 - Blair to Queensway (Blair to Hurdman - some weekday trips only, Queensway - eastbound trips only), Pinecrest, Bayshore, Eagleson, Terry Fox, and Stittsville.
97 - Ottawa Airport, via South Keys to Tunney's Pasture, Bayshore and Bells Corners.
98 - Hawthorne via South Keys to Tunney's Pasture.
99 - Lebreton to Greenboro during rush hour. Greenboro and South Riverside, or Riverview at all times.
101 - St. Laurent to Lees, Queensway, Pinecrest (westbound), Bayshore, Eagleson (eastbound), Teron, and Kanata North.
102 - Place d'Orleans to Lees, via Carling to Tunney's Pasture.
106 - Hurdman to Elmvale via Smyth

The following routes are other major crosstown routes that use small stretches of the Transitway:
4 - Billings Bridge to Hurdman
8 - Lebreton to Hurdman and Walkley to Billings Bridge.
85 - Bay to Hurdman
86 - Lincoln Fields to Baseline and Tunney's Pasture to Hurdman.
87 - Heron to Dominion and South Keys to Greenboro.
111 - Lincoln Fields to Baseline and Heron to Hurdman.
114 - Hurdman to St-Laurent and South Keys to Greenboro.
116 - Hurdman to South Keys (Greenboro to Hurdman peak-periods only) and Baseline to Lincoln Fields (peak-periods only except at Baseline).
118 - Terry Fox, Baseline, and Billings Bridge to Place d'Orleans (Hurdman to Place d'Orleans - peak periods only).
176 - Tunney's Pasture to Hurdman (peak-periods only, except at Tunney's Pasture), Fallowfield
182 - Eagleson to Bayshore and Lincoln Fields to Hurdman. Route 182 is an expanded peak-only route.
Most peak-only and express routes also use the Transitway, mostly from downtown out towards the suburbs.
Some Greyhound intercity buses use the Transitway from St-Laurent to Laurier either to/from the city's main bus terminal.

A coalition group had launched a website (see external links section below) about a proposed new route from Barrhaven to Kanata via Bayshore and Baseline stations. This would require rebuilding the ramps connecting the grade-separated section of the Transitway to the Transitway lanes along Highway 417.

In June 2006, the City of Ottawa released a 2009 service plan for the O-Train route, the Transitway and new bus routes. (This plan was cancelled shortly after the 2006 municipal election.)

To the west, there are new Moodie, Bells Corners, Queensway-Carleton, Hazeldean and Kanata North Transitway stops. To the south, there is a new Nepean Sportsplex stop, and proposed stops for Strandherd and Marketplace. To the east, the Southeastern transitway is extended to Hawthorne, and the Eastern to Blackburn Hamlet and beyond. To the north, there is a planned stop at the Les Terrasses Complex. It also investigates the possibility of transitway buses along Baseline, another downtown location, and from further east on the Queensway from Kirkwood all the way to Eagleson.

Bus congestion on the Central Transitway

The downtown section of the Transitway, the Central Transitway, consists of a couplet of single bus-only lanes on Albert and Slater Streets (one-way public streets in opposite east and west directions). Traffic congestion here, where the buses mingle with private vehicles, sometimes causes service delays and is seen by some as the main weakness in the Transitway system. The Transit Committee had planned to reduce the number of buses travelling on Albert and Slater streets by 30% if the extension of the light-rail was implemented. Other measures may be implemented to avoid traffic problems despite the cancellation of the O-Train extension downtown.

All OC buses are now low floor "accessible" buses, with an aim to improve access to the service by the elderly and handicapped, and to speed up boarding by other passengers; most of these are high-capacity articulated buses. Route 96 has used the new Invero low-floor buses since September 2005 and route 101 (formerly known as route 99) since the start of spring 2006. Route 94 and express 61 and 77 are experimenting with three Alexander Dennis Enviro500 double decker buses and OC Transpo plans to buy more to integrate them on other transitway routes.

There have been plans to expand the transitway to reach other parts of Ottawa; it now only runs along the north edge of the city for most of the central area, leaving Transitway bus routes (94, 95, 96, 97) to mix with other traffic on local streets on the end parts of their runs.

Some future extensions may include: 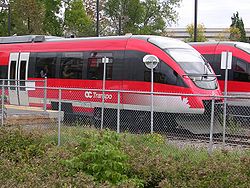 Since 2001, Ottawa has operated a light rail transit system called the O-Train as a pilot for the full rollout of light rail transit technology. The pilot has been deemed a success, exceeding its ridership targets significantly; it carries 10,000 passengers per weekday. The pilot route utilizes former Canadian Pacific Railway track running south 8 km from the Ottawa River to Greenboro Station (where the South Keys shopping complex is located), and serves Carleton University.

The current line was to be replaced, and then extended south-west (but later cancelled by City Council). It would have contained two parallel tracks, and be electrified. Full operation would have begun in 2009-2010 with a total length of 27 km. However, a new transit plan was voted by Council for extensions to Riverside South and with possible extension to downtown (via a tunnel), Blair, Cumberland South and portions of the west end of the city.

A formal environmental assessment was underway to examine providing a second line for east-west service. Although the idea was to improve Ottawa's capacity problems for east-west transportation, critics of the process (including light rail supporters) believed the preferred route would have not address these problems successfully.

The O-Train utilizes the Bombardier "Talent" Diesel Multiple Unit double-ended trainsets, designed and manufactured by Bombardier in Germany. This is the first application of the Talent in North America.[1] 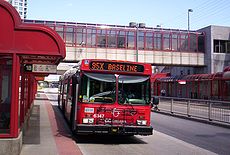 Fallowfield to near Nepean Sportsplex is along a $10 million isolated bus-only road (opened on December 13, 2005)[2], although this section has no stations and features a railway level crossing, the first on the Transitway. From Nepean Sportsplex to Baseline Station, buses run along Woodroffe Avenue in dedicated lanes, making several stops at regular bus stops.

Beyond Baseline, the Transitway is fully isolated to Lincoln Fields.

To this point the route is on non-dedicated street lanes along collector and arterial roads, much like a standard bus route. Regular stops are made between Stittsville and Eagleson. However, in the long range, there are possible plans to built a Transitway segment between the two stations. In addition, Teron Station, located at the corner of Campeau Drive and March Road, is a station opened September 2007 served by Rapid Transit Route 101. [2]

The Transitway proper starts past Eagleson, with a dedicated lane on the 417. One stop is made (on request only via a special signal) at the Moodie Drive interchange.

The Transitway leaves the 417 at Bayshore and follows the northern edge of the 417 to the new Pinecrest Station before returning to dedicated lanes on Highway 417. There is no date on when the section between Pinecrest and the Southwest Transitway will be built.[3]

At Lincoln Fields, the West and Southwest branches merge.

From Lincoln Fields to Dominion, the Transitway travels the Ottawa River Parkway in a shared traffic lane.

From Dominion to just past Tunney's Pasture Station, the Transitway runs in an isolated, below-grade road built along the alignment of a former railway line.

From just past Tunney's Pasture Station to Booth Street, the Transitway emerges from below-grade and runs in an isolated, at-grade road built on a former railway yard. Main western terminus for routes 94, 98 and 102. It also serves as an occasional terminus for route 97 as well as some rush hour trips of route 95.

Just past Lebreton, the isolated transitway ends and eastbound buses take Slater Street, while westbound buses are on Albert Street; there are dedicated lanes on both streets, but traffic is generally slow in the dense downtown core. This arrangement continues to just past Metcalfe.

Over the Mackenzie King Bridge, the Transitway continues in dedicated lanes. The isolated Transitway resumes at Waller Street.

Past Train, the dedicated Transitway parallels the Queensway to beyond Blair.

The Transitway joins Regional Road 174 a short stretch past Blair, running in a dedicated lane. Some weekday route 96 trips start/end here. Route 95 buses exit at Montreal Road and at Jeanne d'Arc Boulevard and stop on the ramps at ordinary bus stops; these will be upgraded to full Transitway stations by 2009, tentatively named Montreal/St. Joseph and Jeanne d'Arc Stations. On the 2006-2007 system map, OC Transpo had included Jeanne d'Arc as a transit station.[3]

There is no dedicated bus lane from Place d'Orleans to Trim, buses run in mixed traffic. However, in the long range there could be a separate route built.