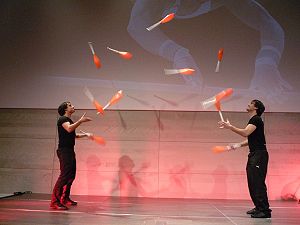 In general, two people face each other a few metres apart, each holding three clubs. On a signal, both start juggling in time with each other. To pass, each replaces a normal throw to themselves directly across to the other person. Both people do this at the same time, for example with their right hand, and then receive the incoming pass with their left hand. From the point of view of their pattern, the incoming pass behaves exactly as if they had thrown it themselves.

A good club pass comes from the side of your body and arrives at your partner after completing a single spin. It should arrive vertically upwards, slightly outside (away from the centre) of the body (around 20cm) although everyone has their own preference. This is where the pass is easiest to catch for the receiver. This also applies to left hand and right hand passes.

A basic variation in the pattern depends on how often the "self throw" is replaced with a pass.

Four-count, or "Every others"
One of the most basic forms of passing is called four-count. In four-count, every fourth throw — that is, every second right-handed throw — is a passing throw.
Three-count, or "Waltz"
In three-count, every third throw is a pass. This means that the passing throw alternates from the left hand to the right hand, with the same club being passed each time.
Two-count, "Solids", or "Everies"
Every right-handed throw is a pass. This is a fast-paced pattern which can be maintained for a long period of time with practice.
One-count, or "ultimates", also referred to as a "thunder shower"
Every throw is a pass. Effectively, two separate juggling patterns are formed: One between the left hand of the first juggler, and the right hand of the second, and vice versa. This is a very quick pattern which is rarely maintained for long periods. It requires equal skill with both hands.

Other popular patterns are;

Pass Pass Self
Literally where both people perform Pass, Pass, Self.
Book Ends
Where both people perform Pass, Self, Pass, Self, Pass. The hand you are passing with should change hands after three passes with no selves in between.
Jim's
Jim's patterns are a variant of passing where one juggler passes crosses (diagonally) whilst the other passes straights. This leads to interesting complexities such as hurries (where one hand will throw receive a pass and throw again whilst the other holds a club). Jim's can be applied to most if not all patterns, although the six club Pass Pass Self pattern leaves the person throwing straights never passing with the left hand.
Chocolate Bar
The Chocolate bar is a variant on the one-count passing pattern where you alternate between self-throws and passes. The pattern is two passes followed by two self-throws. It allows passers to get practice passing ultimates while at the same time getting the occasional break.
Jalfrezi's
Every eighth throw is a trick shot pass. Similar to four-count, but on the second pass- that is, the eighth throw- the pass is made by a trick shot. One juggler could pass behind the back, the other could pass under the leg. Popularised by Chichester based jugglers the Jalfrezi Brothers- Clyde Macfarlane and Timothy Longland.

There are many tricks that can be performed over the pattern, including varying the throwing method (under the leg, behind the back, spinning the wrong way, not spinning at all) and the throwing height (which requires the other person to fill in while he waits to catch it). It is also possible to pass with more than two people, and with more than three clubs each.

Slow start is generally preferred by beginners, but fast start is more popular amongst confirmed passers.

There are three main types of rhythm. The first is the usual where each hand throws with equal time between each other. The second is sometimes referred to as a galloped rhythm, when the left hand only throws after a little after the right hand has thrown. The third is synchronous, when both hands throw at the same time.

A collision is when two or more clubs hit each other in the air. Usually they are unrecoverable. There are ways of avoiding collisions. For example, in 6 club Ultimates, both throwing from in to out can prevent the clubs from colliding. Other ways are to make one person throw wider than they would normally do.