The town of Cudworth has a population of 738 people and has a public K-12 school, 60 local businesses and 3 churches serving the rural area surrounding it. It is surrounded by a large agricultural community. The first pioneers in the late 19th century came to this area. They were settled west of modern day Cudworth. German settlers arrived in 1903 and settled in nearby Leofeld, Saskatchewan.

When the village of Cudworth was established in 1911, it had been named after an Englishman named Ralph Cudworth. Ralph worked on the railroad and was a distinguished philosopher. Cudworth in 2004. Present day Cudworth continues to consist mainly of families with Ukrainian, and German origins. 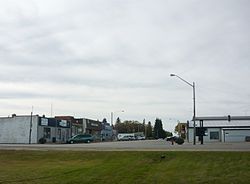 Cudworth is in hilly partially forested country east of the South Saskatchewan River. The area is part of the aspen parkland biome. The town was originally peopled primarily by settlers of Eastern European origin including Germany, Hungary, Poland and Ukraine.[1]

Located two miles west of Cudworth is Our Lady of Sorrows shrine. The site consists of an altar, chapel, statue and Stations of the Cross on a hill west of highway 2. The shrine was established after three children saw beautiful sad lady dragging chains and carrying a golden cross – when they approached her, she vanished. There is an annual pilgrimage every year on the tenth Sunday after Easter and is the official pilgrimage of the Saskatoon Ukrainian Catholic Eparchy.[2]

In September 2008, Cudworth's grain elevator went up into flames. Cudworth was one of three Saskatchewan towns that still had an original Wheat Pool elevator and a CN train station.