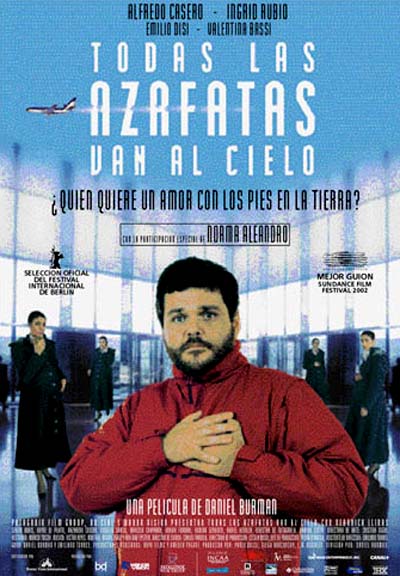 "Todas las azafatas van al cielo" (English: "Every Stewardess Goes to Heaven") (2002) is a Argentine and Spanish directed by and written by Burman and . The picture was produced by Pablo Bossi, Pedro D'Angelo, and José María Morales. It features as Julián and as the air hostess Teresa. [imdb title|id=0293654|title=Todas las azafatas van al cielo.]

The metaphorical romantic comedy-drama is about a widowed ophthalmologist and a free-spirited airline flight-attendant (who the director believes seems to hold a certain fascination in western culture).

The story tells of Julián () an overweight ophthalmologist who is emotionally upset due to the unexpected death of his flight-attendant wife and of Teresa () a free-spirited young stewardess unhappy in love and fearful that she's pregnant.

Julián makes the decision to travel to the , where they he and his wife first met, in order to scatter his wife's ashes and to follow his wife in death by ending his own life by freezing to death.

At the end of a cold ski lift ride, Julián meets meets Teresa when they both attempt to commit suicide at the same time by standing out in the snow. Instead of tragedy, they decide get a warm drink and begin to grow to like each other. After spending the night together, they depart. Teresa is a bit upset that she's late for work and blames Julián.

She tries to get back to work but has problems because of terrorist threats at the airport.

Julián, crashes his rental, but survives and spends a long time in the hospital recovering. He starts to appreciate life again and tries to find her. Fate pushes them back together.

Filming locations The film was shot in and , .

The film was first featured in Argentina on March 21, 2002. It screened in sixteen countries worldwide. The motion picture premiered in Spain on and in June 2002, where it won an award at the .

Reviewer Fred Thom, writing for the "La Plume Noir", liked the look of the film, and wrote, "The director multiplies allegories, making the stewardess an angel whose wings would be those of a plane while the hospital shown to us like a corridor towards another life. The images pass slowly, posed and quiet, supported by an atmospheric soundtrack, making "Every Stewardess Goes To Heaven" a visually bewitching work." [ [http://www.plume-noire.com/movies/reviews/everystewardess.html Thom, Fred] . "Le Plume Noir," film review, 2003.]

Film citic Neil Young liked the film and wrote, "Burman aims to craft a frothy lampoon of people whose are fine in the air, hopeless on the ground. While some of the aeroplane-terrorism jokes may seem somewhat awkward post-9/11, it’s hard to avoid being carried along: like the cobbled-together plane we keep hearing about through the film, this may be a slightly ungainly and enterprise, but it gets quite nimbly from A to B." [ [http://www.jigsawlounge.co.uk/film/stewardess.html Young, Neil] . "Jigsaw Lounge," film review, , .]

Jonathan Holland, critic for "Variety" magazine, liked the film and its quirky themes, writing "A delightful, offbeat romance that combines melancholy and mirth in just the right amounts, Daniel Burman's "Every Stewardess Goes to Heaven" is a worthy addition to the list of acclaimed pics that have emerged from Argentina recently, as well as a fine followup to Burman's multiple prize-winning (but very different) "" (1999). Ingrid Rubio, a sometimes shaky screen presence to date, finds her feet in this sentimental but intelligent story with quirky yet believable characters and stunning polar-circle settings. Charming fable about how people whom life has turned cold must learn to warm up again was well received at the Berlin fest, and further such showings are likely, though that's less than the movie deserves." [Holland, Jonathan. "Variety," ibid.]

Yet, Robert Hunter, writing for the "" magazine, thought the film was a "diverting but lackluster romancer" and the story needed the visuals to make it interesting. He wrote, " [T] his flight of fancy needs every glimpse of the location's glaciers, soaring white peaks and stormy skies." [Hunter, Robert. "The Hollywood Reporter," film review, , 2002.]