The New York and Harlem Railroad (now the Metro-North Railroad Harlem Line) was one of the first railroads in the United States, and possibly also the world's first street railway. Designed by John Stephenson, it was opened in stages between 1832 and 1852 between Lower Manhattan to and beyond Harlem. Initially using horses, the line was partially converted to use steam engines and then electricity, using a Julien electric traction car. In 1907 the then leaseholders of line, New York City Railway went into receivership. Following a further receivership in 1932 the New York Railways Corporation converted the line to bus operation. The Murray Hill Tunnel now carries a lane of road traffic, but not the buses. 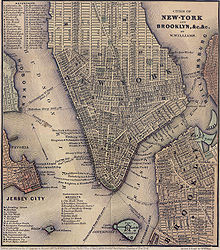 An 1847 map of Lower Manhattan; the only railroad in Manhattan at that time was the New York and Harlem Railroad

The company was incorporated on April 25, 1831 as the New York and Harlem Railroad, to link New York City with suburban Harlem.[1] Among the company's founders was John Mason, a wealthy banker and president of Chemical Bank who was among the largest landowners in New York City.

The first section, along the Bowery from Prince Street north to 14th Street, opened on November 26, 1832. After that, the following sections opened:

Between 1847 and 1856, a track was built in Grand Street between Centre Street and the Bowery (along with one block on the Bowery) for northbound trains.[3] Southbound trains continued to use the old route.

In 1864 or 1865, a branch was added for trains between downtown and the East 34th Street Ferry Landing, running along 32nd Street, Lexington Avenue and 34th Street. This was the start of separate horse car service, running between Astor House and the ferry.

Grand Central Depot opened just north of 42nd Street in October 1871, and intercity passenger trains from the north were ended there. (Ironically, by this point, the first of the Manhattan New York subway had opened on Ninth Avenue.) Freight trains continued to operate along the tracks south of Grand Central, as did streetcars (still turning off at 42nd).

Horses were used at first, but this was changed to steam north of 23rd Street.[when?] It was soon bought by Cornelius Vanderbilt.

The New York City Common Council passed an ordinance on December 27, 1854, to take effect in 18 months, barring the NY&H from using steam power south of 42nd Street, due to complaints by persons whose property abutted the right-of-way. Before that, the steam locomotives had run to 32nd Street. When the ordinance took effect, the NY&H had not done anything. After much debate, including an injunction issued preventing the city from enforcing the ordinance, the courts struck down the injunction on July 30, 1858.[4][5]

On July 2, 1870, horse cars started to run not only to the 34th Street Ferry but to 73rd Street via Madison Avenue. These trains ran through the Murray Hill Tunnel and turned west on 42nd before going north on Madison (northbound cars used Vanderbilt Avenue to 44th Street).[6] The line was soon extended to 86th Street and then to Harlem.

The first electric streetcar open to passengers in New York City, a Julien electric traction car, was run on September 17, 1888 on the line to 86th Street.[7] The line went back to using horses for a time, but switched to an below-grade third rail (commonly called a "conduit") in 1897. On July 1, 1896, the Metropolitan Street Railway leased the streetcar lines.

Receivership and conversion to bus operation 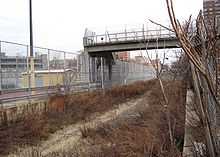 The New York City Railway, which leased the Metropolitan, and hence also these lines, went into receivership on September 24, 1907.[8][9] The receivers returned operation of the Fourth Avenue line back to the Metropolitan Street Railway on July 31, 1908. The lease was terminated on January 31, 1920 with operation was returned to the NY&H.

On October 10, 1932, it was leased again, this time to the New York Railways Corporation, with the right to convert the line to bus operation. The stockholders voted to do this on February 19, 1934.

An approximation of the route is now traveled by MTA New York City Transit's M1 bus. The Murray Hill Tunnel now carries a lane of roadway, but not the buses.