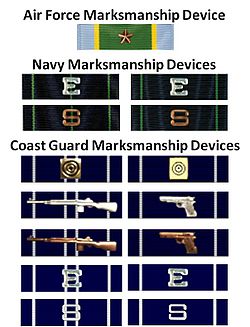 For a period of time the S Device and E Device were bronze for two consecutive qualifications and a third qualification was necessary to changed the Device to silver with a permanent status.[citation needed]

For Coast Guardsman who have been awarded the bronze or silver Coast Guard Excellence-in-Competition Pistol Shot or Rifleman Badge by the CMP can wear a bronze or silver miniature replica of the M1911 or M14 attached to the U.S. Coast Guard Pistol or Rifle Marksmanship Ribbon respectively. For Coast Guardsman who have been awarded the Coast Guard Distinguished Pistol Shot or Marksman Badge by the CMP, a small gold metal replica of a pistol or rifle target can be attached to the appropriate marksmanship ribbon. [4] [6]