In molecular biology, DNA ligase is a specific type of enzyme, a ligase, (EC 6.5.1.1) that repairs single-stranded discontinuities in double stranded DNA molecules, in simple words strands that have double-strand break (a break in both complementary strands of DNA). Purified DNA ligase is used in gene cloning to join DNA molecules together. The alternative, a single-strand break, is fixed by a different type of DNA ligase using the complementary strand as a template,[1] but still requires DNA ligase to create the final phosphodiester bond to fully repair the DNA.

The mechanism of DNA ligase is to form two covalent phosphodiester bonds between 3' hydroxyl ends of one nucleotide, ("acceptor") with the 5' phosphate end of another ("donor"). ATP is required for the ligase reaction, which proceeds in three steps: (1) adenylation (addition of AMP) of a residue in the active center of the enzyme, pyrophosphate is released; (2) transfer of the AMP to the 5' phosphate of the so-called donor, formation of a pyrophosphate bond; (3) formation of a phosphodiester bond between the 5' phosphate of the donor and the 3' hydroxyl of the acceptor.[2] 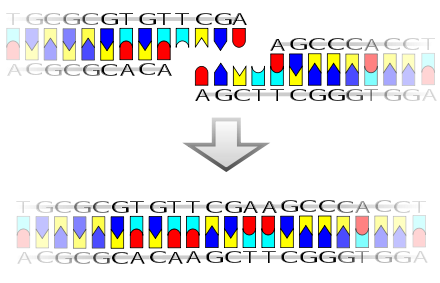 A pictorial example of how a ligase works (with sticky ends)

In mammals, there are four specific types of ligase.

One vital aspect to performing efficient recombination experiments involving the ligation of cohesive-ended fragments is controlling the optimal temperature. Most experiments use T4 DNA Ligase (isolated from bacteriophage T4), which is most active at 25°C. However, for optimal ligation efficiency with cohesive-ended fragments ("sticky ends"), the optimal enzyme temperature needs to be balanced with the melting temperature Tm (also the annealing temperature) of the sticky ends being ligated.[3] If the ambient temperature exceeds Tm, the homologous pairing of the sticky ends would not be stable because the high temperature disrupts hydrogen bonding.[4] Ligation reaction is most efficient when the sticky ends are already stably annealed, disruption of the annealing ends would therefore results in low ligation efficiency. The shorter the overhang, the lower the Tm, typically a 4-base overhang has a Tm of 12-16°C.

Since blunt-ended DNA fragments have no cohesive ends to anneal, the melting temperature is not a factor to consider within the normal temperature range of the ligation reaction. However, the higher the temperature, the less chance that the ends to be joined will be aligned to allow ligation (molecules move around the solution more at higher temperatures). The limiting factor in blunt end ligation is not the activity of the ligase but rather the number of alignments between DNA fragment ends that occur. The most efficient ligation temperature for blunt-ended DNA would therefore be the temperature at which the greatest number of alignments can occur. Therefore, the majority of blunt-ended ligations are carried out at 14-16°C overnight. The absence of a stably annealed ends also means that the ligation efficiency is lowered, requiring a higher ligase concentration to be used.(T4 DNA ligase is the only commercially-available DNA ligase to anneal blunt ends).[3]

The first DNA ligase was purified and characterized in 1967. The common commercially available DNA ligases were originally discovered in bacteriophage T4, E. coli and other bacteria.[5]