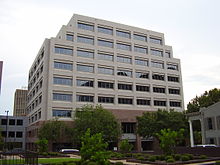 Marion Price Daniel, Sr. (October 10, 1910 – August 25, 1988), was a Democratic U.S. Senator and the 38th Governor of the state of Texas. He was appointed by President Lyndon B. Johnson to be a member of the National Security Council, Director of the Office of Emergency Preparedness, and Assistant to the President for Federal-State Relations. Daniel also served as Associate Justice of the Texas Supreme Court.

Price graduated from Baptist-affiliated Baylor University in Waco. He worked as a lawyer in Liberty County. In 1938, he was elected to the Texas House of Representatives and took office early in 1939. Daniel opposed Texas adopting a sales tax, and he was elected Speaker of the House in 1943.[2]

The historian Charles Waite of the University of Texas-Pan American in Edinburg describes Daniel, particularly in regard to his early years in politics, as a "southern business progressive who promoted efficiency in government in regard to roads, schools, and agriculture." Though he stood with Franklin D. Roosevelt, who swept Texas on four occasions, Daniel was skeptical of the growing federal bureaucracy and generally opposed tax increases to pay for added costs of government.[3]

When the legislature adjourned in May 1943, Daniel waived his draft exemption[4] and enlisted in the United States Army, serving in the Security Intelligence Corps. In this capacity, he saw service in Amarillo, Texas, Pine Bluff, Arkansas and Baton Rouge, Louisiana. He received his Second Lieutenant commission in 1944 after training at the Judge Advocate General Officers School in Ann Arbor, Michigan, afterwards becoming an instructor at the Army School for Personnel Services in Lexington, Virginia. The Army shared Daniel with the United States Marine Corps in 1945, the latter sending him to Sasebo, Nagasaki, Japan to set up a Marine Personnel School. He received "outstanding authority" citations from both branches of service, and was discharged in May, 1946.

Price returned to Texas after his military service and won the seat of [5]Attorney General.

In 1952, Daniel was elected to the United States Senate. He was immediately taken under the wing of Senate Minority Leader Lyndon B. Johnson,[4] with the senior Senator helping to alleviate office space shortage by allowing Daniel's staff to work out of LBJ's office.

Daniel held positions on committees[4] of the Interior; Interstate and Foreign Commerce; Post Office and Civil Service; and Judiciary, as well as Judiciary subcommittees on Internal Security and Juvenile Delinquency.

Opposed to desegregation efforts, Senator Price Daniel joined 19 other Senators and 77 members of the United States House of Representatives in signing the 1956 Southern Manifesto,[8] which condemned the 1954 United States Supreme Court decision in Brown v. Board of Education,[9] and encouraged states to resist implementing it. The Supreme Court's 1958 Cooper v. Aaron[10] decision held that the states were bound to uphold the previous decision on desegregation.

Some believe that the most important and long-lasting accomplishment [11] of Price Daniel was in helping to retain Texas title to the submerged lands, and mineral rights therein, off the coast. The victory has netted billions of dollars for Texas schools. Texas viewed this issue as of primary importance during the 1952 campaign. Eisenhower supported state ownership, while Adlai Stevenson stood in opposition. The state of Texas, including many prominent state Democratic party leaders, went with Eisenhower who won the state of Texas[12] in the election.

The Tidelands[13] controversy was over who owned the rights to 2,440,650 acres (9,877.0 km2) of submerged land in the Gulf of Mexico between low tide and the state's Gulfward boundary three leagues (10.35 miles) from shore. Texas acquired the rights as a republic, and later reserved the rights when it entered the Union in 1845. The Texas legislature authorized the School Land Board to execute the mineral leases on behalf of the Permanent School Fund.

Among coastal states, the Federal government claimed ownership when oil was discovered on the lands.[13] The first lawsuit, United States v. California, 332 U.S. 19,[6] was filed by the Federal government against California in 1946. The attorneys general of all other states filed an amicus curiae brief in opposition. Price Daniel Sr., as Texas State Attorney General, argued the case before the Supreme Court of the United States on March 13–14, 1947, on behalf of all the other states. In 1947, the Supreme Court decided against California on June 23, 1947.

Congress presented a 1952 bill confirming states' ownership, which was vetoed by President Harry Truman.[14] In that same year, Presidential candidate General Dwight D. Eisenhower stated his belief that the Annexation Agreement of Texas gave the rights to Texas. Candidate Adlai Stevenson announced he would veto any bill out of Congress guaranteeing the rights to Texas. The Texas state Democratic convention passed a resolution urging all its members to vote for Eisenhower.

In 1953, then Senator Price Daniel [15] was one of 35 co-sponsors to the Florida Senator Spessard Holland-authored Senate Joint Resolution 13 restoring the right of the submerged lands to the coastal states.[4] Price Daniel, Lyndon Johnson, Spessard Holland and Senate Majority Leader Robert Taft worked tirelessly to overcome the 27-day filibuster of the bill, with it passing the Senate 56-35 votes, and approved by the House of Representatives on May 13. President Eisenhower signed the bill into law on May 22, 1953.

Then U.S. Senator Daniel was elected governor in 1956. Thereafter, Daniel's chief intraparty rival Ralph Yarborough went on to succeed Daniel (after a temporary appointee, William A. Blakley of Dallas) in the Senate in a special election held in 1957. Also in the 1956 Democratic primary was a flamboyant former Republican, the historian J. Evetts Haley, who pledged to support segregation, remove price controls from natural gas, and halt the activities of South Texas political boss George Parr of Duval County. Haley returned to the Republican Party in 1964.

As Governor, Daniel saw legislative fruition of his proposals to reorganize of the State Board of Insurance,[4] passage of an ethics code for lawmakers and other state employees, regulation of lobbyists, an improved structure for state archives, and a long-range water conservation plan.

Daniel was reelected governor in 1958 and 1960. In 1960, Daniel won renomination over Jack Cox, an oil equipment executive from Houston. Daniel then prevailed in the general election by a much larger margin than that obtained by John F. Kennedy and Lyndon B. Johnson as the Democratic presidential and vice presidential nominees. Daniel received 1,637,755 votes (72.8 percent) to Republican William M. Steger of Tyler, who obtained 612,963 ballots (27.2 percent). Yet Kennedy and Johnson barely won the Texas electoral votes over Richard M. Nixon.

In 1961, the legislature passed a 2-cent sales tax,[16] which Daniel allowed to become law without his signature[17] so the state would remain solvent. After the passage of the sales tax, Daniel's popularity waned, and he failed at his attempt to be elected to a fourth term in 1962. He lost the Democratic nomination to former Navy Secretary John B. Connally, Jr. Other 1962 Democratic candidates included highway commissioner Marshall Formby of Plainview, state Attorney General Will Wilson, a future Republican convert, and Major General Edwin A. Walker, who made anticommunism the centerpiece of his campaign. Connally went on to defeat Jack Cox, who had switched to Republican affiliation, to claim the right to succeed Daniel as governor.

President Johnson later appointed Daniel to head the Office of Emergency Preparedness. In 1971, Governor Preston Smith named Daniel to fill a vacancy on the 9-member Texas Supreme Court; he was re-elected twice in 1972 and 1978, before he retired during his second term. The Price Daniel Sr. State Office Building is named in his honor.

After retiring from the Texas Supreme Court,[18] he served as pro-bono legal council for the Alabama-Coushatta Indians.

The Jean and Price Daniel Home and Archives [19] came under full ownership of the State of Texas in October 1998. Governor and Mrs. Daniel began construction on the Greek Revival style 7,318-square-foot (679.9 m2) Liberty, Texas house in 1982, with an official opening in 1984. It was patterned after the Governor's Mansion in Austin designed by architect Abner Cook. The Daniels donated the home and 10 acres (40,000 m2) of land, reserving a lifetime interest, to the Texas State Library Archives. The home is the repository of the library, archives, furniture, and mementos that document the Daniels' lives and years of public service.

The Price Daniel House, maintained and funded by the Atascosito Historical Society, is located on the grounds of the Sam Houston Regional Library and Research Center, a part of the Archives and Information Services Division of the Texas State Library and Archives Commission. Located 3 miles (4.8 km) north of Liberty on FM 1011, the Center is open Monday through Friday, 8 AM to 5 PM and Saturday 9 AM to 4 PM. Free admission.Tours are available by appointment; group tours must be arranged two weeks in advance.

Price Daniel was a member[20] of the following organizations: