Sousse (Arabic: سوسة Sūsa‎, Berber: Susa) is a city in Tunisia. Located 140 km south of the capital Tunis, the city has 173,047 inhabitants (2004). Sousse is in the central-east of the country, on the Gulf of Hammamet, which is a part of the Mediterranean Sea. The name may be of Berber origin: similar names are found in Libya and in the south of Morocco (Bilād al-Sūs). The city is the capital of Sousse Governorate with 540,000 inhabitants (2005 estimate). Its economy is based on transport equipment, processed food, olive oil, textiles and tourism. It is home to the Université de Sousse. 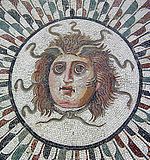 A mosaic depicting Medusa in the Museum of Sousse.

In the 11th century B.C., the Phoenicians founded Hadrumetum. The city allied itself with Rome during the Punic Wars, thereby escaping damage or ruin and entered a relatively peaceful 700-year period under the Pax Romana. Livy tells us that Hadrumetum was the landing place of the Roman army under Scipio Africanus in the second Punic War. As part of Bonifacius's revolt against Constantinople, the Vandals were invited in and they took Hadrumetum in 434 CE and renamed the town Hunerikopolis. During the Vandalic War Justinian retook the town in 534 CE and restored its Roman name.

In the 7th century A.D. Arab-Islamic armies conquered what is now Tunisia and rapidly spread Arab culture across what had been a thoroughly Romanized and Christianized landscape. The Arabs seized the city, which in the aftermath of Rome's fall was but a remnant of its former self. They renamed the city Sûsa and within a few decades elevated it to the status of the main seaport of the Aghlabid Dynasty. When the Aghlabids invaded Sicily in 827, Sûsa was their main staging ground.

In the centuries that followed, as Europe gained technological ascendancy and began pushing back at Islam, Sûsa was briefly occupied by the Normans in the 12th century, was later more thoroughly occupied by the Spanish, and in the 18th century was the target of bombardments by the Venetians and the French. The French called the city Sousse.

Despite the turmoil around it, Sousse's character had retained the solidly Arabian look and feel it had assumed in the centuries after Islam's wars of conquest. Today it is considered one of the best examples of seaward-facing fortifications built by the Arabs. Its ribat, a soaring structure that combined the purposes of a minaret and a watch tower, is in outstanding condition and draws visitors from around the world.

These days, Sousse, with a population of more than 540,000, retains a medieval heart of narrow, twisted streets, a kasbah and medina, its ribat fortress and long wall on the Mediterranean. Surrounding it is a modern city of long, straight roads and more widely spaced buildings.

Sousse's old city has apects that made it ideal as a film location. Most famous is Raiders of the Lost Ark (1981), where Sousse represents Cairo. It is noteworthy that the styles of Sousse, white-washed houses with blue details, bear no resemblance to the actual architecture of Cairo.

Sousse is the third city of the country after Tunis and Sfax.

Although Sousse is associated with olive oil manufacture and has other industries, tourism predominates today. An olive grove stretching over more than 2,500 square kilometres, constitutes one of its main riches since Antiquity. A busy port, open to the town centre and adds a touch of liveliness to its activity. 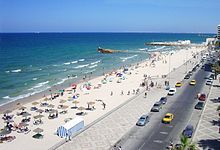 Sousse is an important tourist resort. Hotel complexes with a capacity of 40,000 beds extend 20 km from the old city (Medina) north along the seafront to Port El Kantaoui.

It is only 20 km from the international airport of Monastir. The fine sandy beaches are backed by orchards and olive groves. It has a Mediterranean climate, with hot, dry summers and warm, mild wet winters. The seaside location moderates the climate, making it an all-season resort.

Some 1,200,000 visitors come every year to enjoy its hotels and restaurants, nightclubs, casinos, beaches and sports facilities.

A Medina, surrounded by its city walls and fortifications, is of historical interest. The Medina includes open and covered bazaars (souks). Buildings of historical interest include the ribat castle, the central mosque, and a historical museum in the Casbah with mosaics from the area's many Roman villas. The Carthaginian catacombs can be visited.

The Ribat of Sousse 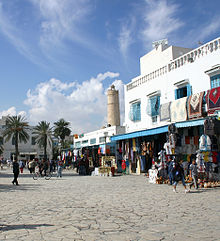 UNESCO declared the medina of Sousse a World Heritage Site in 1988, citing among other things its preservation from modern development.