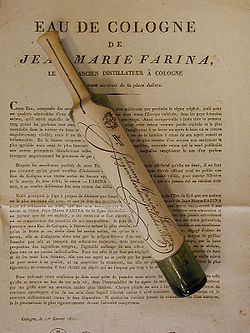 Farina 1709, the eau de cologne that gave its name to the class

Eau de Cologne or simply Cologne (German: Kölnisch Wasser, “Water of Cologne”) is a toiletry, a perfume in a style that originated from Cologne, Germany. It is nowadays a generic term for scented formulations in typical concentration of 2-5% essential oils. However as of today cologne is a blend of extracts, alcohol, and water. (For further detail on distinctions, see Perfumes) Colognes may be used by men or women but are generally marketed to men as an alternative to perfume.

In a base of dilute ethanol (70-90%), Eau de Cologne contains a mixture of citrus oils including oils of lemon, orange, tangerine, bergamot, lime, grapefruit and neroli. It can also contain oils of lavender, rosemary, thyme, petitgrain (orange leaf), and jasmine.

The original Eau de Cologne is a spirit-citrus perfume launched in Cologne in 1709 by Giovanni Maria Farina (1685–1766), an Italian perfume maker from Santa Maria Maggiore Valle Vigezzo, Italy. In 1708, Farina wrote to his brother Jean Baptiste: "I have found a fragrance that reminds me of an Italian spring morning, of mountain daffodils and orange blossoms after the rain".[1] He named his fragrance Eau de Cologne, in honour of his new hometown.[2]

The Original Eau de Cologne composed by Farina was used only as a perfume and delivered to "nearly all royal houses in Europe". [3] His ability to produce a constantly homogenous fragrance consisting of dozens of monoessences was seen as a sensation at the time. At the time, a single vial of this aqua mirabilis (Latin: miracle water) cost half the annual salary of a civil servant.[2] When free trade was established in Cologne by the French in 1797, the success of Eau de Cologne prompted countless other businessmen to sell their own fragrances under the name of Eau de Cologne. 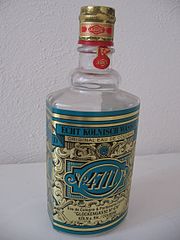 Giovanni Maria Farina's formula has been produced in Cologne since 1709 by Farina opposite the Jülichplatz[2] and to this day remains a secret. His shop at Obenmarspforten opened in 1709 and is today the world's oldest fragrance factory. Other Colognes were launched over 100 years after Farina's one, such as the famous Cologne 4711, named after its location at "Glockengasse No. 4711". In 1806, Jean Marie Joseph Farina, a grand-grand-nephew of Giovanni Maria Farina (1685–1766), opened a perfumery business in Paris that was later sold to Roger & Gallet. That company now owns the rights to Eau de Cologne extra vieille in contrast to the Original Eau de Cologne from Cologne.

The term "cologne" can be applied to perfume for men or women, but modern convention dictates, in the English language, that it should be assumed the term is most likely when talking about men's fragrance. This convention does not exist in German, however. 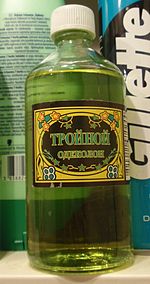 In former Soviet countries varieties of Troynoy Eau de Cologne are widely used as a regular beverage among poor drunkards especially because it is very cheaply priced compared to vodka.[4]