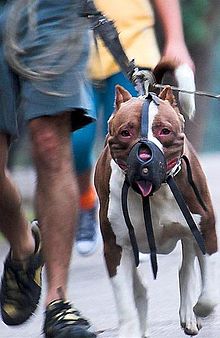 The Dangerous Dogs Act 1991 (c. 65) is an Act of the Parliament of the United Kingdom that was introduced in response to various incidents of serious injury or death resulting from attacks by aggressive and uncontrolled dogs, particularly on children. These incidents received heavy tabloid attention, causing widespread public concern over the keeping of dangerous dogs and a resulting legislative response.

The effect of the Act

Under the 1991 Act (and as amended in 1997) it is illegal to own any Specially Controlled Dogs without specific exemption from a court. The dogs have to be muzzled and kept on a lead in public, they must be registered and insured, neutered, tattooed and receive microchip implants. The Act also bans the breeding, sale and exchange of these dogs, even if they are on the Index of Exempted Dogs.[1][dead link]

Four types in particular were identified by the Act:

The Act also covers cross breeds of the above four types of dog. Dangerous dogs are classified by 'type', not by breed label. This means that whether a dog is prohibited under the Act will depend on a judgement about its physical characteristics, and whether they match the description of a prohibited 'type'. This assessment of the physical characteristics is made by a court.

The Act applies in England, Wales and Scotland,[2] with The Dangerous Dogs (Northern Ireland) Order 1991 having a similar effect in Northern Ireland.[3]

The Index of Exempted Dogs

The Index of Exempted Dogs is maintained by the Animal Welfare section of the Department for Environment, Food and Rural Affairs, which administers the registration of specially-controlled dogs in England and Wales.

Under the 1991 Act as amended it remains illegal to own any of these dogs without specific exemption from a court. The dogs have to be muzzled and kept on a leash in public, they must be registered and insured, neutered, tattooed and receive microchip implants.[1]

There have been several test cases of the Act, most famously Dempsey (a pit bull terrier) who in 1995 was finally reprieved from a destruction order, to widespread media attention. The definition of the word "type" in the legislation was of particular controversy, as was the lack of discretion that the Act gives magistrates.

Criticism of the Act

The Act has been described as a piece of rushed legislation which was an overreaction to a transient public mood.[5][6] The Act is sometimes cited as an unfavourable example of such legislation,[7][8] and in January 2007 was included in public responses to a BBC Radio 4 poll of unpopular UK legislation.[9]

Many other countries also have laws pertaining to dangerous dogs. These vary in severity. In some jurisdictions in Australia dogs which have been declared dangerous are required to wear a collar of red and yellow stripes; under the legislation of some municipalities of Queensland, such dogs are seized and destroyed. In some local government areas restrictions are very carefully spelt out.[10]