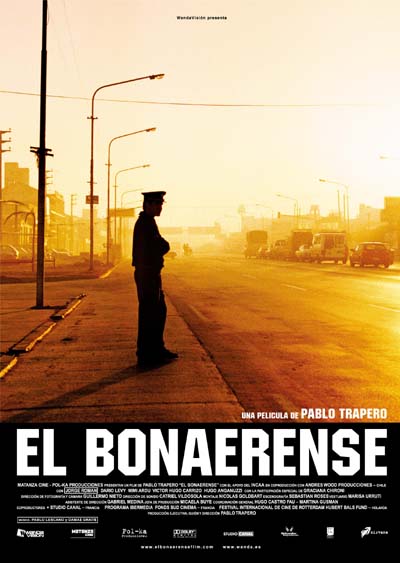 "El bonaerense" (2000) is an Argentine, Chilean, French, and Dutch drama . It was directed and produced by . The screenplay was a joint effort of Nicolas Gueilburt, Ricardo Ragendorfer, Dodi Shoeuer, Pablo Trapero, and actor , and partly funded by . It features , Mimí Ardú, among others. [imdb title|id=0315850|title=El bonarense.]

The movie deals with the corruption of the Bonaerense Police in the , , and the lives of those involved in it.

Zapa () is a locksmith apprentice living the simple life in with his family.

After the locksmith Polaco (Hugo Anganuzzi) pulls a job on a safe and uses him as a scapegoat, Zapa is made to pay for the crime by serving in the Buenos Aires police jail, which is pictured as notoriously corrupt. This takes him to the "La Matanza" in .

Here, Zapa is taken in as the "protegée" of his superior Gallo (Darío Levy) and begins to climb the ladder of corruption. At the same time he has an affair with instructor Mabel (Mimí Ardú).

His journey through the political underworld as he frames and bribes ultimately takes him to the edge of innocence, and a final confrontation with "El Polaco."

"New York TImes" film critic lauded the film and wrote, "There are no crusading moralists to clean up the mess in "El Bonaerense," Pablo Trapero's grim, dispassionate drama of police corruption, set mostly in contemporary Buenos Aires. This powerful sweat-stained swatch of Argentine neo-realism, filmed in harsh high contrast that throws its characters' faces into deep shadow, follows the initiation of Zapa (Jorge Román), a naïve police recruit, into a labyrinth of sleaze... [the film] is all the more disturbing for refusing to act as an exposé. It just throws up its hands and says that this is the way it is. And its pointed detachment lends certain scenes an almost farcical sense of the absurd." [ [http://movies.nytimes.com/movie/review?_r=1&res=9800E4DD1F3BF935A15752C1A9659C8B63&oref=slogin Holden, Stephen] . "The New York Times," film review, , . Last accessed: , .]