The chip (chad) receiver from a UNIVAC key punch 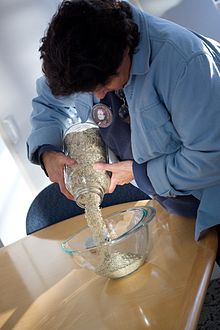 Pouring chads from a jar at the Computer History Museum

Chad refers to paper fragments created when holes are made in a paper, card or similar synthetic materials, typically computer punched tape or punched cards. Sometimes chad has been used as a mass noun or as a countable noun, and the plural is commonly either "chad" (as in "a pile of chad") or "chads" (as in "the multiple hanging chads"). Chad is not to be confused with the name "Chad."

Chad were made infamous in the highly contentious 2000 United States presidential election where many of Florida votes used Votomatic style punched card ballots. Incompletely-punched holes resulted in partially punched chad, where one or more corners were still attached, a hanging chad, dimpled chad or pregnant chad - where all corners were still attached, but an indentation appears to have been made. These votes were not counted by the tabulating machines.[1][2]

Chad are more commonly seen in mundane, everyday settings. When a hole punch of the functional or decorative type is used, it removes a small amount of paper - a chad. Chad are also common in stores, where holes are punched so that merchandise can be hung on pegs or clips. Chad are also the small strips, pieces of paper or shred waste that remain of the documents fed through a paper shredder. Chad can also be the result of punching holes in any sort of thin material, such as cloth, plastic, or even sheet metal.

The term chad is sometimes used as a mass noun, similar to sand: "a pile of chad" means "a pile of paper debris", and the individual paper piece might be called either "a piece of chad" or "a chad".

Chad is sometimes used as confetti. This is generally harmless when using thin circular paper chad. The rectangular chad from punched cards is unsuitable due to the sharp corners and the toughness of the card stock risking eye injury. 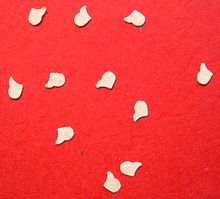 The origin of the term chad is uncertain. Patent documents from the 1930s and 1940s show the word chad, often in reference to punched tape used in telegraphy. These patents sometimes include synonyms such as chaff and chips. A patent filing in 1930 included a "receptacle or chad box ... to receive the chips cut from the edge of the tape."[3] A 1938 patent filing included a "chaff or chad chute" to collect the chad.[4] Both patents were assigned to Teletype Corporation.

The plural chads is attested from about 1939, along with chadless, meaning without [loose] chad. Clear definitions for both terms are offered by Walter Bacon in a patent application filed in 1940 assigned to Bell Telephone Laboratories: "... In making these perforations, the perforator cuts small round pieces of paper, known in the art as chads, out of the tape. These chads are objectionable ... Chadless tape is prepared by feeding blank tape through a device which will not punch a complete circle in the tape but, instead, will only cut approximately three-quarters of the circumference of a circle ... thereby leaving a movable, or hinged, lid of paper in the tape.[5]

In the New Hacker's Dictionary, two derivations for chad are offered, a back-formation from chadless and an acronym for Card Hole Aggregate Debris.[6] These are clearly intended as jokes. More serious speculation about the origins of the word Chad suggests derivation from the Scottish name for river gravel, chad, or the British slang for louse, chat.[citation needed]

When a chad is not fully detached from the ballot it is described by various terms corresponding to the level of indentation. The following terms generally apply when describing a four-cornered chad:[7]

Krusty: I want my show to have a timeless quality.
Man: Here's your hanging chad sketch, Krusty!
Krusty: Ooh, you worked in Judge Ito!