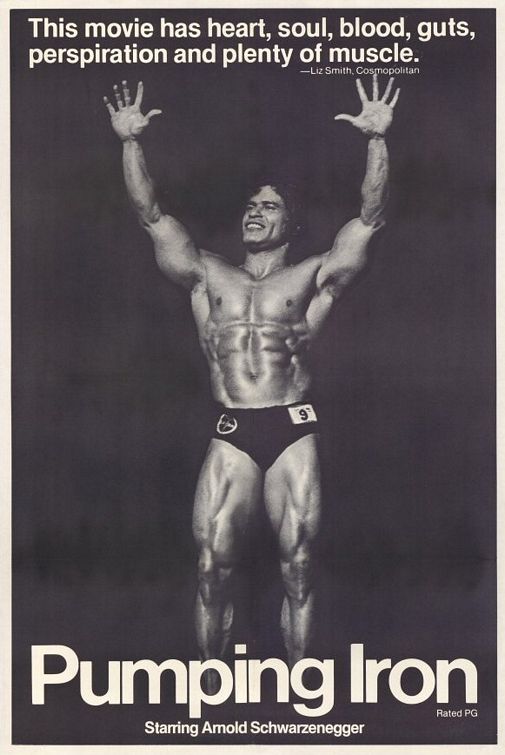 
"Pumping Iron" is a 1977 about the run-up to the competition. The film focuses on and his competitors, and . The documentary was co-directed by and George Butler. It was based on the book of the same name by and George Butler (Simon and Schuster, 1974).

"Pumping Iron" is considered to be the all-time classic bodybuilding movie,weasel word|date=November 2007 documenting what is commonly referred to as "The Golden Age" of bodybuilding, a time when mass and size mattered less, and symmetry and definition of the body was preferred. The documentary follows the two main bodybuilding competitions, the (for s) and the (for professionals) in , . Though the documentary focuses on Schwarzenegger, many notable bodybuilders make appearances, including , , , , , , , , , , and — all talented champions in their own rights. Ed Corney appeared on the front dust jacket of the hardcover edition of the book and the front of the softcover version, as well as on the poster for the movie.

The film was re-released on in for the 25th Anniversary of the original. The DVD featured behind the scenes footage and recent interviews with the cast.

In addition to popularizing bodybuilding, "Pumping Iron" was the world's introduction to Arnold Schwarzenegger and was a contributing factor to his acting career. Franco Columbu would go on to win the Olympia in and , and eventually became a practicing , and actor. Lou Ferrigno also went on to much success: though he never won the Olympia title, he succeeded in television and movies, starring as the title character in the TV series "The Incredible Hulk".

A 25th anniversary edition of Pumping Iron included comments from Arnold and George Butler, admitting that parts of the movie were staged to make the film more interesting. At first Butler had tried to make a simple documentary highlighting the human side of bodybuilders, but somehow it didn't quite "work". He chose instead to take a good guy/bad guy approach. Arnold and Ken Waller were the chosen bad guys. At one point in the movie Arnold mentions that he refused to attend his father's funeral in Austria because he was training for a contest; in the commentary he denies this ever happened. Ken Waller's deviousness toward Mike Katz in the movie was also faked or exaggerated, but it did earn him some real-life boos at later contests. [Interview in "Pumping Iron — 25th Anniversary Edition" DVD extras]

The first part of the documentary features the Mr. Universe contenders and begins with a profile of who is intending to win the Mr. Universe. Competing against Katz is . The two are polar opposites: where Katz is humble and unassuming, Waller is arrogant and dirty (he deliberately hides Katz's belongings at the Mr. Universe to break his focus before going on stage). After a pose-down, Waller, due to his superior definition and proportions, eventually wins the Mr. Universe with Katz coming a distant 4th place. It should be noted that Katz is considered by some to have the greatest chest of all time, measuring at one point a huge 60 inches (152 cm), a feat only equaled by Lou Ferrigno.

The second part of the film follows the Olympia contenders, Arnold Schwarzenegger, and . His father in a small downtown gym trains Ferrigno, a steel worker. Ferrigno is humble and trains hard, whereas Arnold trains in the luxurious , flanked by women as he performs his calf raises. Franco and Arnold both train together at the outdoor gym, , where spectators are able to watch, contrasting the conditions Ferrigno is training under. It was, in fact, Ed Corney who was Arnold's training partner for the preparation for the 1975 Olympia. The explanation is not mysterious. Columbu was often busy with his chiropractic education and his training schedule was difficult to coordinate with Arnold's. The film makers shot as much "coverage" footage of Corney as they did of Columbu, based on their belief that there was a good possibility of his taking the under 200 pound title in South Africa. However, when Corney took second place in Pretoria, the film was necessarily edited to put more dramatic focus on Columbu. Franco Columbu is also documented in a memorable scene when he blows air into a hot water bottle until it explodes.

Prior to the Olympia competition the documentary also reveals Schwarzenegger's lesser-known deceptive behavior and practices when it comes to his fellow competitors. Arnold comments that if his competitors are indeed better than him that he will get a room with them the night prior to the competition and simply talk them into losing.

The documentary then takes off to Pretoria, South Africa, to the build-up to the competition. The competitors all take part in the Pre-Judging rounds. The under 200 pounds (91 kg) class is judged first, and Franco Columbu is declared the winner. The next to be judged are the three finalists from the over 200 pounds (91 kg) class, Lou Ferrigno, Arnold, and Serge Nubret. Arnold is declared the winner and must go for a pose-down with Franco Columbu for the overall Olympia title. Arnold for the 6th time is crowned Mr. Olympia; after his win he announces his retirement from competition. He is shown celebrating his victory by smoking marijuana, eating fried chicken and birthday cake; potentially the most taboo combination in Bodybuilding. The documentary ends with all who took part leaving for the airport on a bus.

Arnold walks up to the counter of Gold's Gym::Arnold "Can I sign up? I want to start gaining some muscles."

Franco Columbu, talking about his transition from to America::Columbu "...somebody says 'Go to Hell' when they get upset, there they say 'Go to California!"

Ferrigno and his trainer father have just finished an intense session::Ferrigno's Father: "Remember if you're trainin' hard, he may be trainin' ... twice as hard"

Arnold comparing the "pump" of lifting to sex:

Everybody asks Lou for a speech after singing for his birthday::Ferrigno: "I have nothing to say, I just wanna eat my cake"