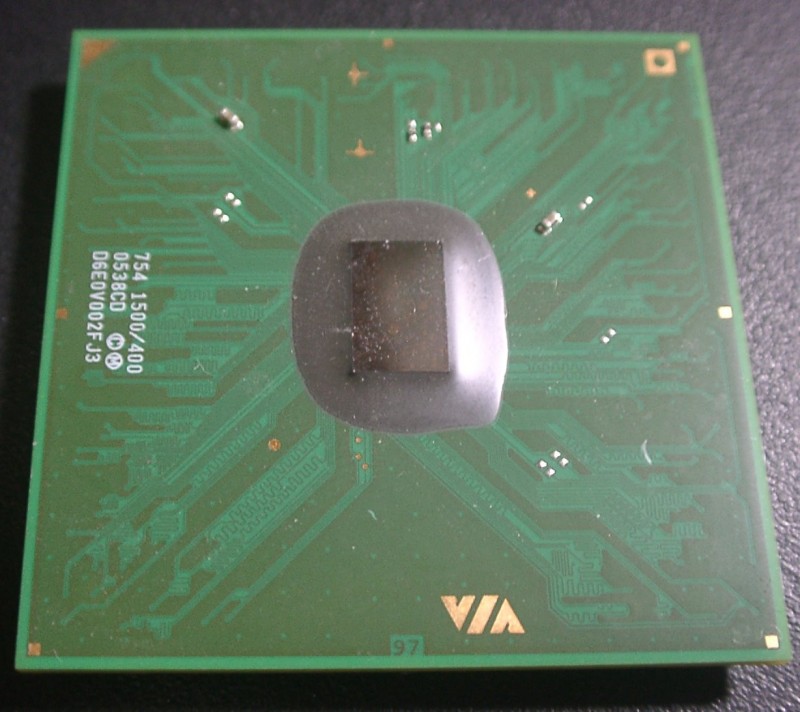 The VIA C7 is an designed by and sold by .

The C7 delivers a number of improvements to the older cores but is nearly identical to the latest VIA C3 Nehemiah core. The C7 was officially launched in May 2005, although according to market reports, full volume production was not in place at that date. In May 2006 Intel's agreement with VIA expired and was not renewed, which was the reason for the forced termination of C3 shipments on March 31, 2006, as VIA lost rights to the socket 370. The C7 appears still to be found in the marketplace, for example, on the bargain-priced TC2502, sold by with a preinstalled and on the .

A 1GHz C7 processor with 128kB of cache memory is used in VIA's own PX10000G which is based on the proprietary form factor. The chip is cooled by a large heatsink that covers most of the board and a small 40mm fan.

In early the schoolroom-use oriented, ultra-portable family debuted with an entirely VIA-based, 1.0, 1.2 and 1.6 GHz C7-M processor portfolio, where the lowest speed model is optimized for running an SSD-based 4GB distribution with a sub-$500 price tag, while the middle tier carries and the top model comes with Business, factory default. HP chose the single-core VIA C7-M CPU in order to meet the already fixed $499 starting price, even though Intel's competing Atom processor line debuted on the 2nd of April, 2008.

The C7 is sold in three main versions:

The Esther (C5J) is the next evolution step of the Nehemiah+ (C5P) core of the line-up, including a migration to a 90 nm (SOI) manufacturing process developed by IBM Microelectronics. The processors are produced in IBM's fab in . The chip was designed by in Austin, Texas, by a permanent staff of 85 engineers.

New Features of this core include:

* Average power consumption of less than 1 watt
* 2 GHz operation and a TDP of 20 watts.
* Level 2 cache increased from 64k to 128k, with associativity increased from 16-way set associative in C3 to 32-way set associative in C7.
* VIA has stated [cite web | author = Shilov, Anton | title = VIA Denies Intel Pentium M Bus Licensing | publisher = X-bit labs | url = http://www.xbitlabs.com/news/mobile/display/20050518045045.html | accessdate = 2007-04-23] the C7 bus is physically based upon the Pentium-M 479-pin packaging, but uses the proprietary VIA V4 bus for electrical signalling, instead of Intel’s AGTL+ Quad Pumped Bus, avoiding legal infringement.
* "Twin Turbo" technology, which consists of dual PLLs, one set at a high clock speed, and the other set at a lower speed. This allows the processor's clock frequency to be adjusted in a single processor cycle, much faster than the comparable Intel technology, providing enhanced power savings.
* Support for and extended instructions.
* in PAE mode that prevents software bugs from being exploitable by viruses or attackers.
* Hardware support for SHA-1 and SHA-256 hashing.
* Hardware based "Montgomery Multiplier" supporting key sizes up to 32K for public key cryptography

* C7 Esther as an evolutionary step after C3 Nehemiah, in which VIA / Centaur followed their traditional approach of balancing performance against a constrained transistor / power budget.

* The cornerstone of the C3 series chips' design philosophy has been that even a relatively simple in-order scalar core can offer reasonable performance against a complex superscalar out-of-order core if supported by an efficient "front-end", i.e. prefetch, cache and mechanisms.

* In the case of C7, the design team have focused on further streamlining the (front-end) of the chip, i.e. cache size, associativity and throughput as well as the prefetch system. [cite web | title = Detailed Platform Analysis in RightMark Memory Analyzer. Part 12: VIA C7/C7-M Processors| publisher = [http://www.digit-life.com/ Digit-Life.com] | url =http://www.digit-life.com/articles2/cpu/rmma-via-c7.html | accessdate = 2007-03-12] At the same time no significant changes to the execution core (back-end) of the chip.

* The C7 successfully further closes the gap in performance with AMD / Intel chips, since clock speed is not thermally constrained.