This page describe terms and jargon related to sculpture and sculpting.

An armature is an internal frame or skeleton which supports a modelled sculpture. A typical armature for a small sculpture is made of heavy gauge wire, bent and twisted to form the basic shape. Often the armature is designed to leave one or more pins protruding from the base of the finished sculpture to facilitate attaching it to the plinth

Is the process of material being steadily and patiently built up upon to create the final sculpture.

An assemblage is a sculpture constructed from found objects. Typically an assemblage does not disguise the original objects used, rather it either tries to show them in a new light, or forms a figurative sculpture from the collection of shapes.

(Italian) A small terracotta sketch of a sculpture: see maquette.

Carving is one of the oldest sculptural techniques. It is a subtractive process; starting with a solid block, the sculptor removes material using chisels and other tools to 'reveal' the finished form. Traditional carving materials include stone, especially marble, and fine grained woods.

Casting is a method of producing one or more copies of a sculpture. Typically, the original sculpture is modelled as usual and covered with a moulding material which sets hard when dry. The mould is then separated to release the original sculpture. Once the mould is reassembled, the casting material is poured in to the void and left to set. Traditionally, molten bronze is used as the casting material, but modern alternatives include resin. When the cast sculpture has cooled, or cured, the mould is again separated to release it, and reassembled ready to cast the next copy.
The cast sculpture may then require some finishing work to remove mould lines and other imperfections. The sculptor may also wish to patinate the work to produce the final piece....

Ciment Fondu is a proprietary product made by Kerneos (previously Lafarge Aluminates) for industrial use but widely adopted by sculptors. It is a type of calcium aluminate cement used for constructing moulds or outdoor works. Typically Ciment Fondu needs to be used as a composite material reinforced with fibre glass, building up the mould in series of layers. Fast setting, it achieves its full strength in 24 hours.

A modern method of casting sculptures in which the casting material is a resin mixed with powdered bronze. The finished sculpture has a surface which looks very similar to a traditionally cast bronze although it tends to be much lighter.

Direct carving is a 20th century term used to describe a less planned approach to carving in which the sculptor carves the finished sculpture without using intermediate models or maquettes. The sculptor either works from memory or works while observing the subject. In some respects it can be seen as a return to the direct approach used in primitive art. This style of carving as also referred to as taille directe.

Hydrocal is a US Gypsum product composed mainly of Plaster of Paris and a small amount of Portland cement. Hydrocal, like its similar formulas Hydrostone, Ultracal, Duracal and others are all used for casting sculptures and other art objects as well as molds. Considerably harder and stronger than straight Plaster of Paris, these products are for indoor use only as they rapidly degrade in the rain.

Kinetic sculpture is sculpture which is designed to move. The movement can be driven by interaction with the viewer, or automatically using motors or air currents, as in the case of a mobile. 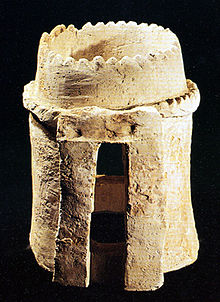 A maquette is a small scale model for a finished sculpture. It is used to visualise and test shapes and ideas without incurring the cost and effort of producing a full scale sculpture. It is the analogue of the painter's cartoon or sketch.
For commissioned sculptures, especially monumental public sculptures, a maquette may be used to show the client how the finished work will fit in the proposed site.

Modeling is one of the most common techniques for sculpting. It is an additive process in which material is steadily built up to produce the finished figure. Unlike carving, the sculptor often also has the option of correcting mistakes by removing or reshaping material. Modeling requires a malleable or plastic material which is later cured or fired to set it hard. Typical modeling materials include clay, wax, plaster, and papier-mâché.
Frequently the modeling material has limited structural strength and will need the support of an armature.

A mould is a reversed impression of a sculpture which is used to cast replica sculptures. The material used to construct the mould needs to accurately reproduce the surface detail of the original sculpture, while also being strong enough to keep its shape during casting and resilient enough to retain detail after multiple castings.
Typical moulding materials include rubber, especially latex rubber, plaster and composites such as ciment fondu.

Papier-mâché is a construction material that consists of pieces of paper, sometimes reinforced with textiles, stuck together using a wet paste (e.g. glue, starch, or wallpaper adhesive). The crafted object becomes solid when the paste dries.

A patina is a natural or applied surface finish to a sculpture piece. Natural patinas may occur by oxidation due to long exposure to air or earth — the most common of which is verdigris on copper or bronze. Artificial patinas can be created by application of chemical pastes or (below melting point) firing in a chemical atmosphere.

Main article: Plasticene
Plasticene is an oil-based clay used for modelling sculptures; its chief advantages over water clay is it does not shrink, crack or dry out and can be worked on over a long period of time.

Main article: Pointing machine
A pointing machine is used to accurately transfer measuring points from a model or maquette into stone or wood, in order to carve an accurate copy. This is called the indirect method of carving.

A term used in stone carving to rescribe the process of carving out the basic shapes of a work before any detail is created.

A method of casting typically used for casting iron, in which the mould is constructed from compacted sand. By its nature, the mould can only be used once and needs to be reformed for each casting.

The term truth to materials relates to 20th century direct carving in which the sculptor responds to the nature of the block being carved as much as the subject. Changes in colouration and imperfections revealed while carving the block are incorporated as features in the finished sculpture. Since the sculptor doesn't know in advance what imperfections will be revealed during the course of carving, a more flexible and fluid approach is required.