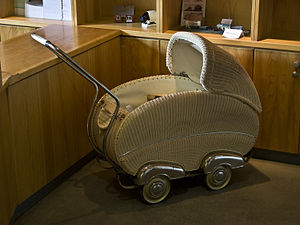 An old-style pram for transporting a baby

Baby transport (commonly known as a baby carrier, buggy, carrycot, child carrier, perambulator, pram, baby basket, push-chair or stroller) consists of devices for transporting and carrying infants. A "child carrier" or "baby carrier" is a device used to carry an infant or small child on the body of an adult. Such on-the-body carriers are designed in various forms such as baby slings, backpack carriers, and soft front or hip carriers, with varying materials and degrees of rigidity, decoration, support and confinement of the child.

A "baby carriage" (in North American English), "pram" (in British English) or "carrycot" is generally used for newborn babies and have the infant lying down facing the pusher.

A "stroller" (North American English) or "push chair" or "buggy" (British English) has the child (generally up to three years old) in a sitting position, usually facing forwards, instead of facing the pusher. 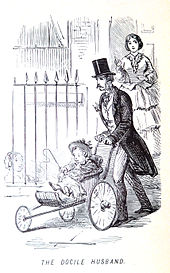 1847 stroller from the John Leech Archives

William Kent developed an early pram in 1733.[1] He was a garden architect in England who had become well known for his work. In 1733, the Duke of Devonshire asked Kent to build a means of transportation that would carry his children. Kent obliged by constructing a shell shaped basket on wheels that the children could sit in. This was richly decorated and meant to be pulled by a goat or small pony. Benjamin Potter Crandall sold baby carriages in America in the 1830s which have been described as the "first baby carriages manufactured in America"[2] His son, Jesse Armour Crandall was issued a number of patents for improvements and additions to the standard models. These included adding a brake to carriages, a model which folded, designs for parasols and an umbrella hanger. By 1840, the baby carriage became extremely popular. Queen Victoria bought three carriages from Hitchings Baby Store.[3] 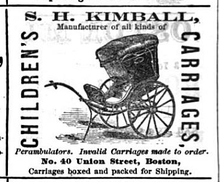 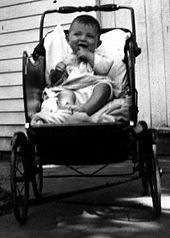 The carriages of those days were built of wood or wicker and held together by expensive brass joints. These sometimes became heavily ornamented works of art. Models were also named after royalty, Princess and Duchess being popular names, as well as Balmoral and Windsor.

In June 1889, William Richardson patented his idea of the first reversible stroller. The bassinet was designed so it could face out or in towards the parent. He also made structural changes to the carriage. Until then the axis did not allow each wheel to move separately, Richardson’s design allowed this, which increased maneuverability of the carriages. 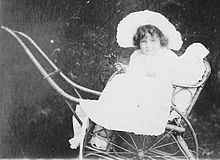 As the 1920s began, modern baby carriages were now available to all families. They were also becoming safer, as new features like larger wheels, brakes, deeper prams, and lower, sturdier frames began to appear.

In 1965, Owen Maclaren, an aeronautical engineer, worked on complaints his daughter made about traveling from England to America with her heavy pram. Using his knowledge of aeroplanes, Maclaren designed a stroller with an aluminum frame and created the first true umbrella stroller. He then went on to found Maclaren which manufactured and sold his new design. The design took off and soon “strollers” were easier to transport and used everywhere.

Since the 1980s, the stroller industry has developed with new features, safer construction and more accessories. 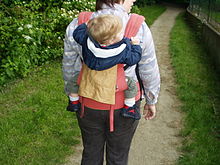 A "child carrier" (also called a "baby carrier") is a device used to carry an infant or small child. This can be on the body of an adult, or separately. On-the-body carriers are designed in various forms such as slings, backpack carriers, and soft front or hip carriers, with varying materials and degrees of rigidity, decoration, support and confinement of the child. Slings, soft front carriers, and "carrycots" are typically used for infants who lack the ability to sit or to hold their head up. Frame backpack carriers (a modification of the frame backpack), hip carriers, slings, mei tais and a variety of other soft carriers are used for older children.

Although the carrying of children on the body using devices is a relatively recent phenomenon in the West, the practice has been established in many cultures for centuries. Images of children being carried in slings can be seen in Egyptian artwork dating back to the time of the Pharaohs, and have been used in many indigenous cultures. Devices for carrying children, not on the body, take the form of "carrycots", although many cultures have produced portable cradles, cradleboards, baskets, travois and other devices for making young infants easier to pick up and set down quickly. The modern car seat infant carrier is a relative latecomer.

On-the-body baby carrying started being known in western countries in the 1960s, with the advent of the structured soft pack in the mid 1960s. Around the same time, the frame backpack quickly became a popular way to carry older babies and toddlers. In the early 1970s, the wrap was reintroduced in Germany. In 1986, the ring sling was invented and popularized. In the early 1990s, the modern pouch carrier was created in Hawaii. While the Chinese mei tai has been around in one form or another for centuries, it did not become popular in the west until it was modernized with padding and other adjustments. It first became popular and well known in mid-2003. 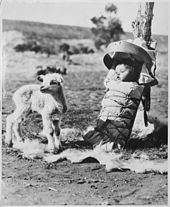 A cradleboard is a Native American baby carrier used to keep babies secure and comfortable and at the same time allowing the mothers freedom to work and travel.[4] The cradleboards were attached to the mother’s back straps from the shoulder or the head. For travel, cradleboards could be hung on a saddle or travois. Ethnographic tradition indicates that it was common practice to cradleboard newborn children until they were able to walk,[5] although many mothers continued to swaddle their children well past the first birthday.

Bound and wrapped on a cradleboard, a baby can feel safe and secure. Soft materials such as lichens, moss and shredded bark were used for cushioning and diapers. Cradleboards were either cut from flat pieces of wood or woven from flexible twigs like willow and hazel, and cushioned with soft, absorbent materials.

The design of most cradleboards is a flat surface with the child wrapped tightly to it. It is usually only able to move its head.

They can be three or four wheelers. 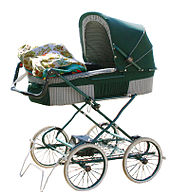 A "baby carriage" (in North American English), "perambulator" or "pram"[6] (in British English) is generally used for newborn babies and has the infant lying down facing the pusher.

Prams have been widely used in the UK since the Victorian era. As they developed through the years suspension was added, making the ride smoother for both the baby and the person pushing it. In the 1970s, however, the trend was more towards a more basic version, not fully sprung, and with a detachable body known as a "carrycot".[7] Now, prams are very rarely used, being large and expensive when compared with "buggies" (see below). One of the longer lived and better known brands in the UK is Silver Cross, first manufactured in Hunslet, Leeds, in 1877, and later Guiseley from 1936 until 2002 when the factory closed. Silver Cross was then bought by the toy company David Halsall and Sons who relocated the head office to Skipton and expanded into a range of new, modern baby products including pushchairs and "travel systems". They continue to sell the traditional Silver Cross coach prams which are manufactured at a factory in Bingley in Yorkshire. 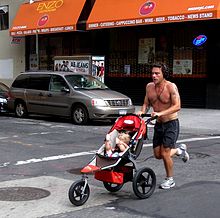 A "stroller" (North American English) or "pram" (British English, "push chair" being previously used as well but less currently) has the child (generally up to three years old) in a sitting position, usually facing forwards, instead of facing the pusher.

Strollers for multiple infants include the twin (side-by-side) and the tandem configurations.

"Pushchair" was the popularly used term in the UK between its invention and the early 1980s, when a more compact design known as a "buggy" became the trend, popularised by the conveniently collapsible aluminium framed Maclaren buggy designed and patented by the British aeronautical designer Owen Maclaren in 1965. "Pushchair" is the usual term in the UK, but is becoming increasingly replaced by buggy; in American English, buggy is synonymous with baby carriage. Newer versions can be configured to carry a baby lying down like a low pram and then be reconfigured to carry the child in the forward-facing position.

A variety of twin pushchairs are manufactured, some designed for babies of a similar age (such as twins) and some for those with a small age gap.

Triple pushchairs are a fairly recent addition, due to the number of multiple births being on the increase. Safety guidelines for standard pushchairs apply. Most triple buggies have a weight limit of 50 kg and recommended use for children up to the age of 4 years.[[

Travel systems or 3-in-1

A travel system is typically a set consisting of a chassis with a detachable baby seat and/or carrycot. Thus a travel system can be switched between a pushchair and a pram.

Another benefit of a travel system is that the detached chassis (generally an umbrella closing chassis) when folded will usually be smaller than other types, to transport it in a car trunk or boot.

Also, the baby seat will snap into a base meant to stay in an automobile, becoming a car seat. This allows undisturbed movement of the baby from the car to the stroller, reducing the chance of waking a sleeping baby. 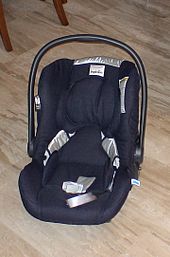 An "infant safety seat", a "child restraint system" or "restraint car seat" is a restraint which is secured to the seat of an automobile equipped with safety harnesses to hold an infant in the event of a crash.

Infant car seats are legally required in many countries to safely transport children up to the age of 2 or more years in cars and other vehicles. The main international standard for baby and child car seats was set by the United Nations Economic Commission for Europe (UN ECE), and the current (2004) version is colloquially known as “Regulation ECE R44-04”.[8][9]

In 1990, the International Organization for Standardization launched the ISOFIX standard, in an attempt to provide a standard for fixing car seats into different makes of car.[10] The U.S. version of this system is called LATCH. While some manufacturers have started selling ISOFIX-compliant baby car seats, there has been a long delay in agreeing on the technical specifications. The current version of the standard was published in 1999 and has yet to become widely used. 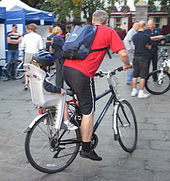 Children's bicycle seats may be positioned behind the adult rider, fastened to luggage racks, or in front, between the adult's arms.

Bicycle trailers are also used for the transport of young children.