Hewlett was born in Redhill, Surrey, UK, and moved with his family to Canada at an early age.[1] Hewlett became a regular on the series Traders and Kung Fu: The Legend Continues and starred in the movie Cube.[2]

Before his acting career took off, he ran Darkyl Media, a web site design firm,[1] and also founded Fusefilm.com, an internet community for filmmakers.[3] (fusefilm.com does not exist anymore.)

Hewlett got his first computer in his mid-teens and became a self-described "computer nerd". While attending high school in Toronto he launched his acting career, starring in student films by Vincenzo Natali.[4] He dropped out of high school in his senior year to pursue careers in acting and computing.[5]

David Hewlett has appeared in many low-budget horror movies, such as The Darkside and the minor cult favourites Scanners II: The New Order and Pin.[2] He also guest starred in several television series. In 1996, he landed one of his better-known roles, as Grant Jansky on Traders. In 1997, Hewlett worked again with Natali, starring in the critically acclaimed thriller Cube as Worth the architect, a role that saw the rise of his stardom due to the commercial success of the low budget Canadian film. 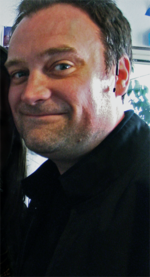 David Hewlett in the conference room at Bridge Studios, Vancouver, during a break in filming Stargate Atlantis episode 5.18 "Identity"

A self-confessed science fiction fan, Hewlett has been quoted saying that Doctor Who is what first sparked his love for the genre[6] and that he made science fiction when he was younger in England on his 8 millimetre camera with friends. Hewlett more or less had his early dreams of working in science fiction made into a reality when he first had a four-episode guest role on Stargate SG-1 as the Stargate expert Rodney McKay, which eventually grew into his starring role on Stargate Atlantis.

In 2007, David appeared as a guest star in the first episode of the TV series Sanctuary, a show produced by and starring Stargate actress Amanda Tapping. He played Larry Tolson – a patient suffering from a form of psychosis, who was shot and wounded before being taken into custody by police as a homicide suspect. There are no plans for him to reprise this role.[7]

In 2006 he wrote and directed A Dog's Breakfast[8] starring himself, his sister Kate Hewlett, his dog Mars, and Stargate Atlantis costars Paul McGillion, Christopher Judge, and Rachel Luttrell.

From 2000 until their divorce in 2004, David Hewlett was married to actress Soo Garay.[9] He became engaged to Jane Loughman in late 2006, and announced their engagement in early January 2007.[10][11] The couple share their house with the rottweiler-terrier mix Mars, adopted from an animal shelter, and who is now one of the stars of the couple's dark comedy feature film A Dog's Breakfast.

David Hewlett has three younger siblings. One, Kate Hewlett, who is also an actor, played the role of Jeannie Miller, McKay's sister in four episodes of Stargate Atlantis. Kate also appeared as the character Marilyn in her brother's directorial debut, A Dog's Breakfast.