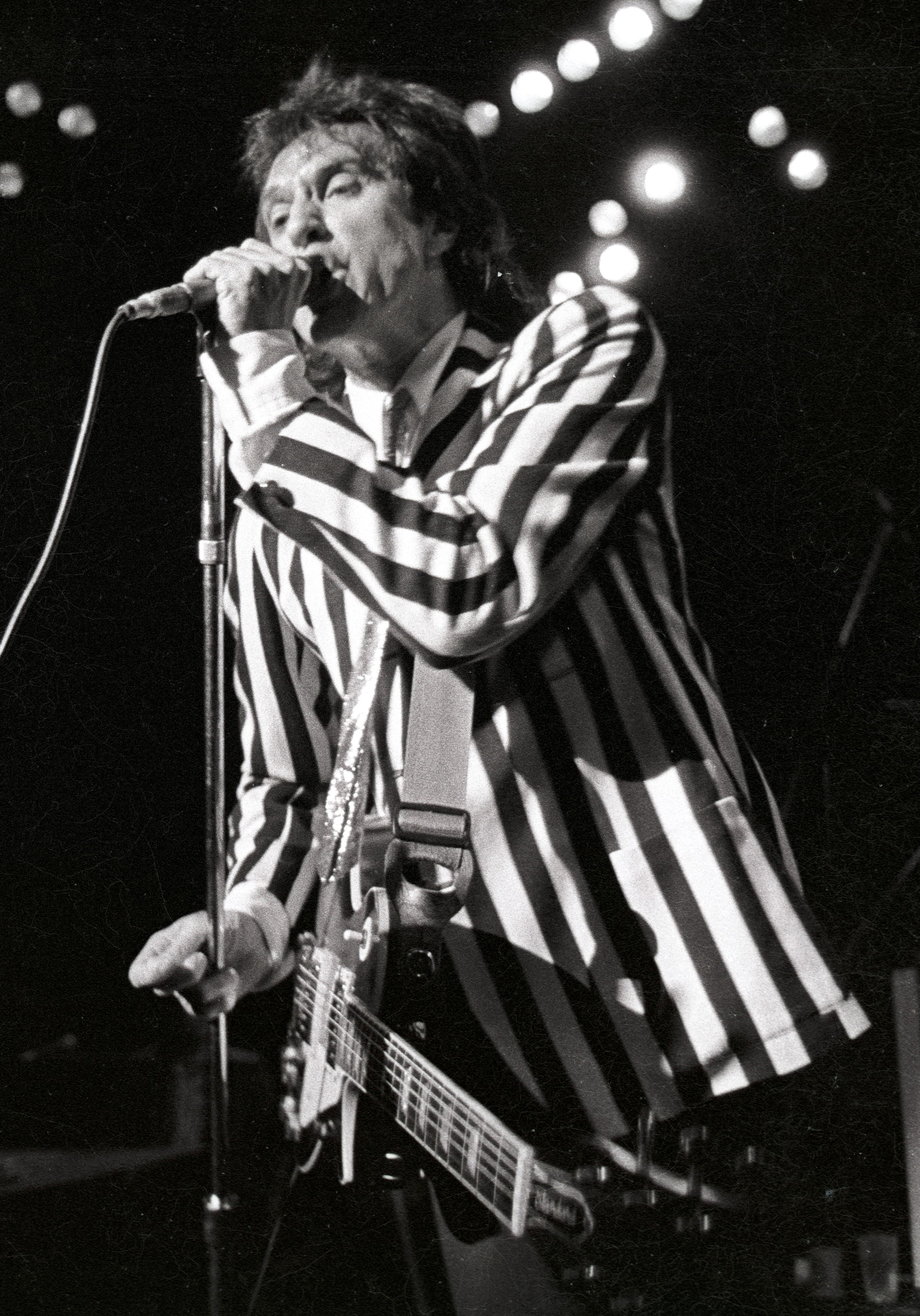 Ray Davies, CBE (born Raymond Douglas Davies, , , ) is an English rock , best known as lead for - one of the most prolific and long-lived bands - which he led with his younger brother, Dave. He has also acted, directed and produced shows for and .

Since the demise of the Kinks in the mid-90s Ray Davies has embarked on a solo career. His February 2006 release "" was his first top 40 hit in UK since the 1960s, when he worked with the Kinks. His second solo album, "" was released in October 2007.

Ray Davies (pronounced DAY-viss [cite web |url=http://www.npr.org/templates/story/story.php?storyId=5319646|title=A Solo Ray Davies Peers into 'Other People's Lives'|accessdate=2007-05-24 |format= |work=All Things Considered, , ] ) was born and raised in the North London area of . He is the seventh of eight children, including six older sisters and his younger brother, Dave. He has been married three times, and has four daughters - Louisa, Victoria, Natalie Rae and Eva.

The musically-inclined Davies was an art student at in London in 1962–1963, when the Kinks developed into a professional performing band. After the Kinks obtained a recording contract in early 1964, Davies emerged as the chief songwriter and "de facto" leader of the band, especially after the band's breakthrough success with his composition "." Davies led the Kinks through a period of musical experimentation between 1966 and 1976, with notable artistic achievements and commercial success. Between 1977 and their breakup in 1996, Davies and the group reverted to their earlier mainstream rock format and enjoyed a second peak of success.

Davies has had a tempestuous, 'love-hate' relationship with younger brother and Kinks guitarist that dominated the Kinks' career as a band. His compositions and talent as a performer are universally hailed within the music industry, but he has maintained a career-long reputation for being fiercely independent and iconoclastic, resulting in a decades-long pattern of conflict and alienation within the industry.Fact|date=February 2007 In 1973, a fed-up Ray attempted to announce the breakup of the band onstage (the microphone had been turned off though) and then attempted suicide by gobbling down handfuls of prescription drugs and washing them down with liquor.Fact|date=May 2007

He was quoted in 1967: "If I had to do my life over, I would change every single thing I have done."Fact|date=February 2007On , Davies was wounded when he was shot in the leg while chasing thieves, who had snatched the purse of his companion as they walked in the of . [cite web |url=http://www.cnn.com/2004/SHOWBIZ/Music/01/05/davies.shot/ |title=Kinks star shot in New Orleans|accessdate=2007-05-24 |format= |work=CNN.com, , ] The shooting came less than a week after Davies was named a Commander of the Order of the British Empire by .

Davies' relationship with singer came at the expense of his marriage to his second wife, Yvonne, who named Hynde as the other woman in the divorce papers. Davies and Hynde were involved in a number of bust ups, the most infamous being when they were due to get married but the registrar refused to marry them. In January 1983, Hynde gave birth to Natalie Rae Hynde, her first child and Davies' third. Within a year, Chrissie had taken the baby with her on a world tour. The relationship ended in 1984.

Davies' compositions over his lengthy career have been an astonishing study in contrasts, from the influential , powerchord of the early Kinks hits in 1964–1966 (most prominently "" and ""); followed a few years later by more sensitive, introspective songs ("Too Much on My Mind", ""); and still later by s championing individualistic lifestyles and personalities ("Lola", ""); celebrations of traditional and living ("", "Victoria"); true -style vaudeville (songs like "Mister Pleasant", "All of My Friends Were There" and "She's Bought a Hat Like Princess Marina's" and the "" albums); and commercial rock which combined elements of all of these ("", "Do It Again").

Davies' songwriting has often been called more mature, sophisticated, and subtle than that of many of his peers among American and British rock s. His often contained elements of and about the aspirations and frustrations of British middle-class life — examples including songs like "" and "Shangri-La", which observed the class-bred insecurity and desperation underlying the materialistic values and conservative protocols of middle-class respectability; "", which mocked the superficiality and self-indulgence of the mod ; and "David Watts", which poignantly expressed the wounded feelings of a plain schoolboy who envies the grace and social privileges enjoyed by a charismatic upperclass student.

His songs also showed signs of social conscience — examples being "God's Children" and songs on the albums, "" and "", which denounced and in favour of simple pastoral living. Mid-period songs like "" and "" offered grim, neo-ian portraits of the desperate poverty that existed amidst the thriving metropolitan British economy of the 1960s.

In particular, Davies' songs on the 1968 Kinks album "The Village Green Preservation Society" embraced "" nostalgia and preservation as themes long before they became fashionable in pop music. Many of his best songs focus on the small-scale, poignant dramas of everyday people (e.g., "", "Two Sisters", "Did You See His Name?"), commonly told as wistful mini-stories.

Aside from the lengthy Kinks discography, Davies has released four solo albums, the 1985 release "" (which accompanied a he wrote and directed), the 1998 release "The Storyteller", "" in early 2006, and "" in October 2007. The release of "Working Man's Café" was followed on 28 October with a performance at the 's series, at The Roundhouse, Camden. The concert was broadcast the same evening on . An edited version of "Working Man's Café", excluding two bonus tracks and , was given away with 1.5million copies of the on 21 October.

Since the Kinks ceased performing in 1996, Davies has toured independently (such as the mainly acoustic "Storyteller" tours with guitarist Pete Mathison), and more recently with a live band consisting of Toby Baron - drums, Dick Nolan - bass, Gunnar Frick - keyboards and Michael "Milton" McDonald - guitar (who replaced Mark Johns in 2007). In 2005, Davies released a four-song EP in the UK called "The Tourist", and a five-song EP in the U.S. entitled "Thanksgiving Day". In the liner notes for "Other People's Lives", Davies confesses he still does not know who he is and where his roots are. In the sing-along "Next Door Neighbour", he seems to be suggesting he is all three characters. The printed lyrics sheet contains some fascinating insights into the songwriting process.

Davies published his 'unauthorized ', "X-Ray", in 1994, a romp through the , which settles burning issues ranging from which band produced the first concept album (not ), to whether or not he had an affair with . In 1997, he published a book of short stories entitled "", described as 'a set on paper'. He has made two films, "Return to Waterloo" in 1985 and "Weird Nightmare" in 1991, a documentary about .

Davies' musical 'Come Dancing', based partly on his 1983 hit single with twenty new songs, opened at the in September 2008.

*On , Davies received the CBE from Queen Elizabeth II for "Services to Music."

*On , Davies won the "Mojo" Songwriter Award, which recognises "An artist whose career has been defined by their ability to pen classic material on a consistent basis."

*On , Davies was awarded the BMI Icon Award