The Other Side of Heaven

The Other Side of Heaven

Infobox_Film
name = The Other Side of Heaven 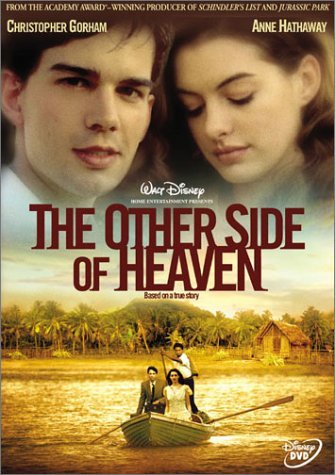 
"The Other Side of Heaven" is a 2001 Walt Disney . It was produced by Academy Award winner and directed by and stars (as ) and Anne Hathaway (as Jean Sabin).

"The Other Side of Heaven" is about 's experience as a in the n islands in the 1950s. It is based on the book that he wrote about his experiences, "In the Eye of the Storm".

The movie focuses on Groberg's adventurous experiences and trials while serving as a missionary in the South Pacific. While portraying these events, the film refrains from being preachy and discusses little LDS theology, instead portraying what LDS missionaries used to have to deal with during their missions.

During the 1950s, John Groberg, who grew up in Idaho Falls, is called on a mission to . There he will spend three years as Elder Groberg (the title "Elder" reflecting his holding of the office of Elder in his church's ) teaching about . His first adventures are just in getting there, including a short time in a local jail.

When Elder Groberg does get to Tonga, he is sent to a group of remote islands. There he is partnered with a Tongan, Feki, who speaks English. But Elder Groberg finds that what he has learned of the Tongan language is severely deficient, so he studies intensely to become proficient. (After this point in the movie, subtitles are no longer used when people are speaking the native language). Then Elder Groberg must learn to deal with the culture.

The island's minister tells the people not to listen to the missionaries. Later, he even sends three men to beat up the missionaries. But one of them, Tomasi, had been baptized a Mormon, so Elder Groberg and Feki were spared. This man later begins coming to the meetings and is chosen by Elder Groberg to be one of his counselors to the local congregations.

A local young woman, at the behest of her family, attempts to seduce Elder Groberg. She eventually relents because he is saving himself for Jean, the young woman he left back home. Some of the narrative of the story is told through the letters that Elder Groberg and Jean write to each other throughout the story. John and Jean marry at the end of the movie, after Elder Groberg's mission is complete.

While travelling at sea, Elder Groberg and his two counselors are caught in a large storm. He is washed overboard and is in fear of his life. He is later rescued.

The climax of the movie is when a hurricane hits the island. Many of the trees had been stripped bare, homes had been destroyed and many people had been killed. The remaining leaders have people gather up what food and fresh water is available so that rationing can begin. But the supply boat takes much longer than anticipated. The inhabitants of the island begin dying of and . Elder Groberg is himself close to death when the island's minister gives him the last of his food, because he is old and Elder Groberg is young. When the supply boat does arrive, the minister is found to have died. The minister is given a very honorable funeral.

*The release of this movie was delayed for the release of the other Disney film, "The Princess Diaries", also starring Anne Hathaway. It was hoped that the success of that film would garner a following for Hathaway and bring in extra earnings for this film.

*This is not a true Disney Film. Disney only had part in the DVD release. It was made by .

*Anne Hathaway tried out for the part in "The Princess Diaries" during filming of this movie. She was not needed until the final few weeks of shooting for the movie.