Augustin was born in New Orleans, Louisiana. His family was forced out of New Orleans by Hurricane Katrina in 2005. He played his senior (final) year at Hightower High School in Missouri City, Texas, however, he earned his diploma from Brother Martin High School in New Orleans, and he participated in the graduation ceremonies with his Hightower classmates on May 28, 2006 at the Toyota Center in Houston, Texas. While at Brother Martin, Augustin led the team to two state championships.

While at Hightower, Augustin thrilled the Hightower faithful with his pinpoint passing and precise shooting. His first game as a Hurricane was against Madison High School, and Augustin nearly pulled off a triple-double in front of a packed house and TV cameras with 29 points, 8 rebounds and 14 assists in a 83–59 victory. He led Hightower to the third round of the playoffs before they were eliminated, and ended the season at 26–4. Augustin won numerous honors after the season as he was named district 20-5A MVP, was named as the Houston Chronicle player of the year, made the first team all Greater Houston, and first team all state teams. Augustin finished his high school career by being named a McDonalds All American, and started as point guard for the West squad against his soon to be teammate at Texas, Kevin Durant.[2] 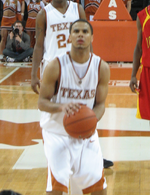 DJ Augustin as a Texas Longhorn

Augustin was one of seven freshman to join the Longhorn basketball program for the 2006–07 season. He started all 35 games in the season as the point guard for the Longhorns, averaging 14.4 points and 6.7 assists per game. For his contributions, he was named to both the All-Big 12 Second Team and the Big 12 All-Rookie Team by the coaches and Associated Press.[3]

Augustin had a chance to participate in the 2007 NBA Draft with former teammate Kevin Durant, but he chose to stay in school to develop his game more with the Longhorns. 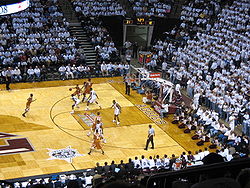 DJ Augustin drives past a screen set by Damion James in a game against Texas A&M University.

Augustin, along with Texas A&M Aggies player Joseph Jones, was featured on the front cover of the November 15, 2007 issue of Sports Illustrated.[4] In the fall 2007 semester, he achieved a 4.0 GPA, raising his cumulative GPA to a 3.64.[5] On February 27, 2008, he was named first-team Academic All-America by the College Sports Information Directors of America. He became the second Texas Longhorn basketball player to achieve the honor, following Jim Krivacs, who received it in 1979.[6] Augustin was also named to the USBWA All-America First Team.

On April 3, 2008, the Naismith Memorial Basketball Hall of Fame awarded him the Bob Cousy Award.[7]

Augustin was selected ninth in the 2008 NBA Draft by the Charlotte Bobcats. On July 8, 2008, he was signed to the rookie scale contract.[10] Under the league's rookie scale, the deal will pay him $1.8 million in the upcoming season and nearly $2 million the next.[11]