/ˌkæzmɵˈsɔrəs/ kaz-mo-sawr-əs) is a genus of ceratopsid dinosaur from the Upper Cretaceous Period of North America. Its name means 'opening lizard', referring to the large openings (fenestrae) in its frill (Greek chasma meaning 'opening' or 'hollow' or 'gulf' and sauros meaning 'lizard'). With a length of 5–6 metres (16–20 ft) and a weight of 3.6 tonnes (4.0 short tons), Chasmosaurus was a ceratopsian of average size. Like all ceratopsians, it was purely herbivorous. It was initially to be called Protorosaurus, but this name had been previously published for another animal. All specimens of Chasmosaurus were collected from the Dinosaur Park Formation of the Dinosaur Provincial Park of Alberta, Canada. C. russelli comes from the lower beds of the formation while C. belli comes from middle and upper beds.[1] 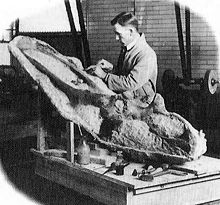 In 1898, Lawrence M. Lambe of the Geological Survey of Canada made the first discovery of Chasmosaurus remains- part of a neck frill.[2] Although recognizing that his find represented a new species, Lambe thought to be from a previously-known short-frilled ceratopsian genus- Monoclonius.[2] He erected the new species Monoclonius belli to describe his finding.[2]

However, in 1913, Charles Sternberg and his sons found several complete "M. belli" skulls in the middle Dinosaur Park Formation of Alberta, Canada.[3] These were finally described as the new genus Chasmosaurus in 1914, again by Lawrence Lambe.[2]

Since that date, more Chasmosaurus remains, including skulls, have been found.[2] There appears to be morphological variation among the known sample of Chasmosaurus skulls,[2] so there are a number of known species of Chasmosaurus. Lambe's original C. belli ('Bell's cleft lizard') was joined by C. canadensis ('from Canada') in the same year. The latter species had been described as Eoceratops canadensis by Lambe but was later reclassified as a chasmosaur by Thomas M. Lehman. Eoceratops and the long-horned Chasmosaurus kaiseni are now provisionally thought to be examples of Mojoceratops.[4] Lull named an unusual, short-muzzled skull, collected in 1926, C. brevirostris. C. M. Sternberg added C. russelli, in 1940, from southwestern Alberta (lower Dinosaur Park Formation).[3] Thomas Lehman described C. mariscalensis in 1989 from Texas, which has now been renamed Agujaceratops.[5] The most recently described species is C. irvinensis, which stems from the uppermost beds of the Dinosaur Park Formation. This species was given its own genus, Vagaceratops, in 2010.[6]

Ceratopsians are split into two subfamilies by taxonomists; those with short frills (centrosaurines), such as Centrosaurus and those with long frills (chasmosaurines), of which Chasmosaurus was one. In addition to the larger frill, the long-frilled ceratopsians typically had longer faces and jaws and it is suggested by some paleontologists that they were more selective about the plants they ate. Long frills were a relatively late development in dinosaur evolution, since even Chasmosaurus dates from the late Cretaceous Period, 76.5 to 75.5 million years ago.[3] The frill of Chasmosaurus has been described as "heart-shaped", since its bone structure consists of two large 'loops' from a central bone.

Some finds include a number of smaller ossifications (called epoccipitals), which may have grown from the perimeter of the frill. The frill may also have been brightly colored, to draw attention to its size or as part of mating display. However, the frill was so large and yet so flimsy (since it was mainly skin stretched between the bones) that it could not have provided much functional defense. It is possible that it was simply used to appear imposing or conceivably for thermoregulation. 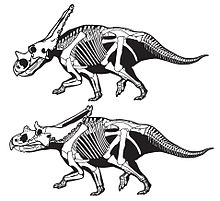 Like many ceratopsians, chasmosaurs had three main facial horns - one on the nose and two on the brow. Different fossil finds have produced inconclusive results - one species of Chasmosaurus, named C. kaiseni, bore long brow horns, while C. belli had only short ones. Although these were initially named as different species, it now seems possible that the long horns belonged to males and the shorter horns to females.

Interestingly, a Chasmosaurus specimen recovered by Sternberg was accompanied by fossilized skin.[2] The skin appears to have had many large scales in evenly spaced rows among smaller scales,[2] with five or six sides per knob. Unfortunately, nothing can be learned about the coloration of Chasmosaurus from the known fossil skin samples.