The Ministry of Social Affairs and Employment (Ministerie van Sociale Zaken en Werkgelegenheid; SZW) is the Dutch ministry of social affairs: it is occupied with employment, relations between employers and employees, the system of social security, and emancipation. The current minister is Henk Kamp.

The ministry is responsible for five fields of policy: 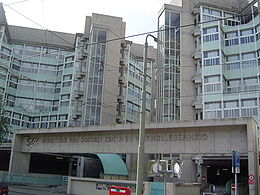 The main office in The Hague

The ministry is currently headed by one minister and one state secretary. The ministry's main office is located in The Hague. The civil service is headed by a Secretary General and a vice-secretary general, who head a system of three directorates general:

The ministry was founded in 1933, at the height of the Great Depression. Before that the limited social policy had been the responsibility of the ministry of Economic Affairs. After the Second World War the ministry became much more important, as the Netherlands transformed into a welfare state.

Council of Ministers
Ministers, including Ministers without Portfolio, chaired by the Prime Minister of the Netherlands and one or more Deputy Prime Minister of the Netherlands
Cabinet (list)
Ministers, including Ministers without Portfolio and State Secretaries
Formations
2003 · 2006/2007 · 2010
Process
Demissionary cabinet · Dutch cabinet formation
Portal:Politics
Categories: