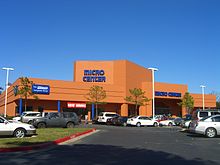 Micro Center is one of the companies of Micro Electronics, Inc., a privately held corporation headquartered in Hilliard, Ohio in suburban Columbus. Besides selling the name brand products of a multitude of manufacturers, Micro Center also sells products under various of its own brand names. These brand names include PowerSpec, WinBook, and IPSG. As well, their Redemtech division sells used and surplus computing equipment through their stores. Micro Center's slogan (appearing on the store's signage outside the stores) has, in later years, come to be "Micro Center: The Ultimate Computer Store".