Photonic-crystal fiber (PCF) is a new class of optical fiber based on the properties of photonic crystals. Because of its ability to confine light in hollow cores or with confinement characteristics not possible in conventional optical fiber, PCF is now finding applications in fiber-optic communications, fiber lasers, nonlinear devices, high-power transmission, highly sensitive gas sensors, and other areas. The term "photonic-crystal fiber" was coined by Philip Russell in 1995–1997 (he states (2003) that the idea dates to unpublished work in 1991), although other terms such as microstructured fiber are also used and the nomenclature in the field is not entirely consistent. More specific categories of PCF include photonic-bandgap fiber (PCFs that confine light by band gap effects), holey fiber (PCFs using air holes in their cross-sections), hole-assisted fiber (PCFs guiding light by a conventional higher-index core modified by the presence of air holes), and Bragg fiber (photonic-bandgap fiber formed by concentric rings of multilayer film).

Structured optical fibers, those based on channels running along their entire length go back to Kasier and co in 1974. These include air-clad optical fibers, microstructured optical fibers sometimes called photonic crystal fiber when the arrays of holes are periodic and look like a crystal, and many other subclasses. Martelli and Canning realized that the crystal structures that have identical interstitial regions are actually not the most ideal structure for practical applications and pointed out aperiodic structured fibers, such as Fractal fibers, are a better option for low bend losses.[1] Aperiodic fibers are a subclass of Fresnel fibers which describe optical propagation in analogous terms to diffraction free beams.[2] These too can be made by using air channels appropriately positioned on the virtual zones of the optical fiber.[3] 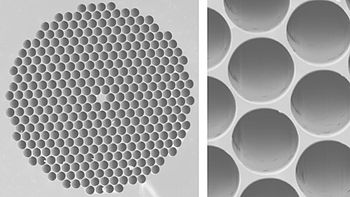 Optical fibers have evolved into many forms since the practical breakthroughs that saw their wider introduction in the 1970s as conventional step index fibers[4][5] and later as single material fibers where propagation was defined by an effective air cladding structure.[6] However, no matter how exotic the method of propagation, and no matter the material system, the sole driver for most that time has been the transportation of light from one point to another, whether by step-index confinement determined by simple Fresnel reflections or by coherent Fresnel reflections in bandgap fibers such as Bragg fibers.[7] This necessarily resulted in fiber design centered on controlling the near field of an optical mode along this distance to control its propagation and attempt to, in most cases, retain its properties after travel.

Photonic crystal fibers are a variant of the microstructured fibers reported by Kaiser et al. They are an attempt to incorporate the bandgap ideas of Yeh et al. in a simple way by stacking periodically a regular array of channels and drawing into fiber form. The first such fibers did not propagate by such a bandgap but rather by an effective step index – however, the name has, for historical reasons, remained unchanged although some researchers prefer to call these fibers "holey" fibers or "microstructured" optical fibers in reference to the pre-existing work from Bell Labs. The shift into the nanoscale[8] was pre-empted by the more recent label "structured" fibers. An extremely important variant was the air-clad fiber invented by DiGiovanni at Bell Labs in 1986/87 based on work by Marcatili et al. in 1984.[9] This is perhaps the single most successful fiber design to date based on structuring the fiber design using air holes and has important applications regarding high numerical aperture and light collection especially when implemented in laser form, but with great promise in areas as diverse as biophotonics and astrophotonics.[10]

In general, regular structured fibers such as photonic crystal fibers, have a cross-section (normally uniform along the fiber length) microstructured from one, two or more materials, most commonly (because its easier to make) arranged periodically over much of the cross-section, usually as a "cladding" surrounding a core (or several cores) where light is confined. For example, the fibers first demonstrated by Russell consisted of a hexagonal lattice of air holes in a silica fiber, with a solid (1996) or hollow (1998) core at the center where light is guided. Other arrangements include concentric rings of two or more materials, first proposed as "Bragg fibers" by Yeh and Yariv (1978), a variant of which was recently fabricated by Temelkuran et al. (2002) and others.

More interestingly, has been the recognition that the periodic structure is actually not the best solution for many applications. Fibers that go well beyond shaping the near field now can be deliberately designed to shape the far-field for the first time, including focusing light beyond the end of the fiber.[11] These Fresnel fibers use well known Fresnel optics which has long been applied to lens design, including more advanced forms used in aperiodic, fractal, and irregular adaptive optics, or Fresnel/fractal zones. Many other practical design benefits include broader photonic bandgaps in diffraction based propagating waveguides and reduced bend losses, important for achieving structured optical fibers with propagation losses below that of step-index fibers.

(Note: PCFs and, in particular, Bragg fibers, should not be confused with fiber Bragg gratings, which consist of a periodic refractive index or structural variation along the fiber axis, as opposed to variations in the transverse directions as in PCF. Both PCFs and fiber Bragg gratings employ Bragg diffraction phenomena, albeit in different directions.)

Generally, such fibers are constructed by the same methods as other optical fibers: first, one constructs a "preform" on the scale of centimeters in size, and then heats the preform and draws it down to a much smaller diameter (often nearly as small as a human hair), shrinking the preform cross section but (usually) maintaining the same features. In this way, kilometers of fiber can be produced from a single preform. The most common method involves stacking although drilling/milling was used to produce the first aperiodic designs.[12] This formed the subsequent basis for producing the first soft glass and polymer structured fibers.

Most photonic crystal fibers have been fabricated in silica glass, but other glasses have also been used to obtain particular optical properties (such has high optical non-linearity). There is also a growing interest in making them from polymer, where a wide variety of structures have been explored, including graded index structures, ring structured fibers and hollow core fibers. These polymer fibers have been termed "MPOF", short for microstructured polymer optical fibers (van Eijkelenborg, 2001). A combination of a polymer and a chalcogenide glass was used by Temelkuran et al. (2002) for 10.6 µm wavelengths (where silica is not transparent).

Photonic crystal fibers can be divided into two modes of operation, according to their mechanism for confinement. Those with a solid core, or a core with a higher average index than the microstructured cladding, can operate on the same index-guiding principle as conventional optical fiber — however, they can have a much higher effective- refractive index contrast between core and cladding, and therefore can have much stronger confinement for applications in nonlinear optical devices, polarization-maintaining fibers, (or they can also be made with much lower effective index contrast). Alternatively, one can create a "photonic bandgap" fiber, in which the light is confined by a photonic bandgap created by the microstructured cladding – such a bandgap, properly designed, can confine light in a lower-index core and even a hollow (air) core. Bandgap fibers with hollow cores can potentially circumvent limits imposed by available materials, for example to create fibers that guide light in wavelengths for which transparent materials are not available (because the light is primarily in the air, not in the solid materials). Another potential advantage of a hollow core is that one can dynamically introduce materials into the core, such as a gas that is to be analyzed for the presence of some substance. PCF can also be modified by coating the holes with sol-gels of similar or different index material to enhance its transmittance of light.