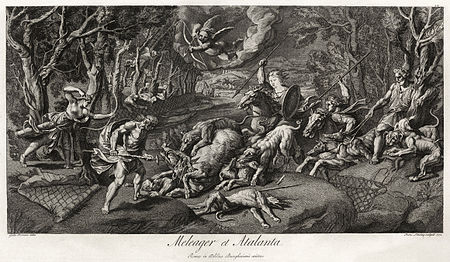 This article is about the mythological figure, for other uses see Meleager (disambiguation). 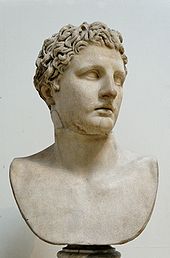 In Greek mythology, Meleager (pronounced /ˌmɛliˈeɪɡər/[2], Ancient Greek: Μελέαγρος Meléagros) was a hero venerated in his temenos at Calydon in Aetolia. He was already famed as the host of the Calydonian boar hunt in the epic tradition that was reworked by Homer.[3] Meleager was the son of Althaea and the vintner Oeneus and, according to some accounts father of Parthenopeus and Polydora.

When Meleager was born, the Moirae (the Fates) predicted he would only live until a brand, burning in the family hearth, was consumed by fire. Overhearing them, Althaea immediately doused and hid the brand.[4] Meleager married Cleopatra, daughter of Idas. However, in some versions, he had to defeat Atalanta in a footrace, in which he was aided by Athena.

Oeneus sent Meleager to gather up heroes from all over Greece[5] to hunt the Calydonian Boar that had been terrorizing the area, rooting up the vines, Oeneus having omitted Artemis at the festival. In addition to the heroes he required, he chose Atalanta, a fierce huntress, whom he loved.[6] According to one account of the hunt, when Hylaeus and Rhaecus, two centaurs, tried to rape Atalanta, Meleager killed them. Then, Atalanta wounded the boar and Meleager killed it. He awarded her the hide since she had drawn the first drop of blood.

Meleager's brother Toxeus, the "archer",[7] and Plexippus (Althaea's brother) grew enraged that the prize was given to a woman. Meleager killed them in the following argument. He also killed Iphicles and Eurypylus for insulting Atalanta. When Althaea found out that Meleager had killed her brother and one of her sons, Althaea placed the brand that she had stolen from the Fates (the one that the Fates predicted, once engulfed with fire, would kill Meleager) upon the fire, thus fulfilling the prophecy and killing Meleager. The women who mourned his death were turned into guineafowl (Meleagrides).

Meleager and Atalanta (first half of 17th century) by Jacob Jordaens

Meleager is also mentioned as one of the Argonauts. In Hades, his is the only shade that does not flee Heracles, who has come after Cerberus. In Bacchylides' Ode V, Meleager is still in his shining armor, so formidable, in Bacchylides' account, that Heracles reaches for his bow to defend himself. Heracles is moved to tears by Meleager's account; Meleager has left his sister[8] Deianira unwedded in his father's house, and entreats Heracles to take her as bride;[9] here Bacchylides breaks off his account of the meeting, without noting that in this way Heracles in the Underworld chooses a disastrous wife.

With his wife Kleopatra, daughter of Idas and Marpessa,[10] he had a daughter, Polydora, who became the bride of Protesilaus, who left her bed on their wedding-night to join the expedition to Troy.

Among the Romans, the heroes assembled by Meleager for the Calydonian hunt provided a theme of multiple nudes in striking action, to be portrayed frieze-like on sarcophagi.