Nisos
For other meanings of Nisos, see Nisus (disambiguation). 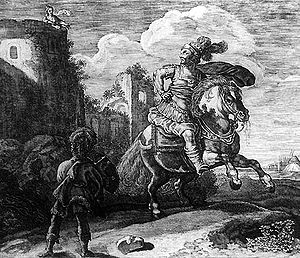 In Greek mythology, Nisos (Nisus) was the King of Megara, and one of the four sons of Pandion II, King of Athens.

He was married to Abrota, sister of Megareus, and when she died, Nisos commanded that the Megarian women wear clothes like she had.[1] His daughter Eurynome, with Poseidon, had the famous son Bellerophon.[2] His second daughter Iphinoe married Megareus, her maternal uncle.[3] The third daughter Scylla was responsible for Nisos' death.

Metion, the uncle of Nisos, had seized the throne from Pandion II. However, upon their father's death, Nisos and his brothers (Aegeas, Pallas, and Lykos) returned to Athens and took back control. They drove out the sons of Metion, put Aegeus on the throne, and divided the government in four. Aegeas became king of Athens, and Nisos the King of Megara.[4]

Minos, King of Crete, attacked Nisos's kingdom during a war with Athens over the death of his son Androgeus. Nisos however had a lock of purple hair that kept him safe from harm.[5] Eros caused his daughter Scylla to fall in love with Minos.[6] In one version, Minos tempts Scylla with a golden necklace to betray and kill her father.[7] In another version, she fell in love with Minos from a distance, and after cutting off the purple lock, she presented it to Minos. However, Minos was disgusted with her act, calling her a disgrace. As Minos's ships set sail, Scylla attempted to climb up one of them. But Nisos, who had turned into a sea eagle or osprey, attacked her. His daughter transformed into a bird as well.[8]