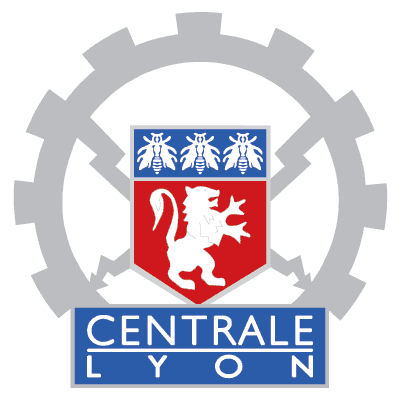 The school is located in , a western suburb of , (in a region called ).

It was founded in on a private initiative by , who was its first President. The founding vision was to educate multidisciplinary engineers for the emerging industry (“doctors for fabs and plants”). The institution was given to the French State Ministry of Education in . Initially located downtown Lyon, it was transferred to Écully, its current location.

The "centralien" program is the main academic program offered by the École Centrale de Lyon, as a . It is quite different from typical university or college studies; and specific to the French system of Grandes écoles. The engineering degree of école centrale de Lyon ("Ingénieur centralien" or “centralien engineer”) is a degree.

The defining characteristic of the curriculum is that it is multidisciplinary, with studies focusing on all math and physics derived engineering specialties: mechanics, aeronautics, electrical engineering, physics, materials, fluid mechanics, applied mathematics, civil engineering, telecommunications and computer science.

The large majority of the students are admitted after two to three years of , known as "mathematics superior" and "mathematics special", which are an undergraduate cursus with almost exclusive emphasis on Math and Physics. These undergraduate students must then take a nation-wide competitive entrance examination () to enter a , including Ecole Centrale de Lyon. Ecole Centrale de Lyon recruits among the top 6% of the students in "classes preparatoires", which makes it a selective and prestigious institution.A few seats are available each year to select students from French universities after completion of three or four years of post high-school education.A significant contingent of students also comes from leading international universities which belong to the TIME network ().

Education at the ECL is multidisciplinary and typically lasts three to four years. During the first two years ("Tronc commun", or “Common Trunk”), students take mandatory classes in science (Mathematics, Physics); in engineering (Solids Mechanics, Heat transfer, Digital image processing, Computer programming,…) and in social sciences (Economics, Management, foreign languages,…). Students are then offered to sign up for different engineering specialties during their last year at the school. After completing these 3 years of education, they receive the degree of “ingénieur de l'École centrale de Lyon”, more commonly called “ingénieur centralien”.

The "École centrale de Lyon" belongs to the French , together with , , , and .

Since , the school has built important international ties. Students come from around the world to study for several years on the school campus. "École centrale" students may also obtain a “double diploma” at one of several partner schools. Furthermore, the École is one of the founding members of the TIME network (). ( [http://www.ecp.fr/en/D_international/D5_universites_partenaires/D5a_liste.htm Member List] )

The École centrale de Lyon is highly involved in research, and has the highest rate of PhD lecturers amidst the French Grandes écoles.

In addition to the "centralien" engineering programme, the "École centrale de Lyon" offers a broad range of master's programs in science and engineering (1 year- or 2 year-programmes). These programmes are opened to applicants having completed their undergraduate studies at other institutions.

The ECL also has a Ph.D. program for students with a master's level. More than 100 doctoral candidates work in 5 different laboratories in the school.