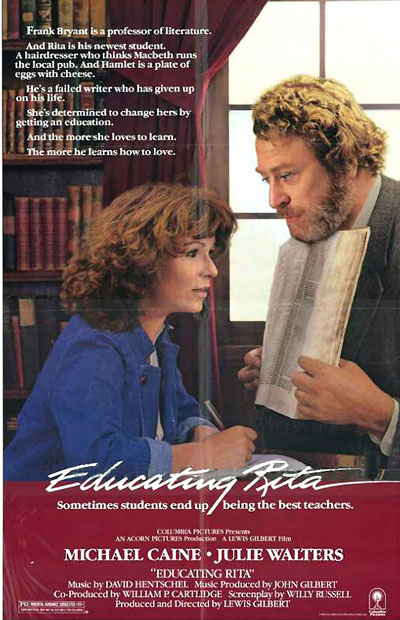 "Educating Rita" is a 1983 film of 's play of the same name. It was directed by and stars , , and with a by Russell. The original play is for two actors and is set entirely in Frank's office at the Liverpool university; the filmed version includes a number of minor characters who are only talked about in the stage play and takes place in a number of mainly Liverpool locations.

An English working-class girl wants to better herself by studying literature. Her assigned Open University professor, however, has long since openly taken to the bottle, and soon develops misgivings about her acculturation to academia.

Starring Michael Caine and Julie Walters, who reprises her role from the stage production. It was also Walters' feature film debut.

Although the setting of the film is , the film was shot in . is used as the setting for the university, and the more modern Arts Building is used for Rita's summer school. The rooms used by Bryant as his office and tutorial room were those of the and the respectively, and while the building was considerably refurnished, the production chose to leave portraits of and and committee photographs in the former and a bust of in the latter. Houses in and were used for Rita's in the film, and one in for Bryant's. The scene in is in filmed in Maynooth, outside Dublin, and Connolly Station and were also used. The scene in the pub was shot in The Stags Head pub on Dame Court in Dublin. However the pub which Rita enters is Lloyd's pub on Amiens Street.

The film won the 1983 . Caine and Walters each received an Oscar-nomination, but neither won.

stated on a 2008 episode of that she was not the first woman to be considered for the role of Rita, despite the fact that she had done the role on stage. Walters specifically mentioned that she had been put into second place due to the fact that she was not yet a star, and that more high profile names were being considered, amongst which were legendary country singer and part-time actress . However, she was eventually awarded the part due to the fact that with secured as Dr. Bryant, the film was no longer in need of a well-known face.